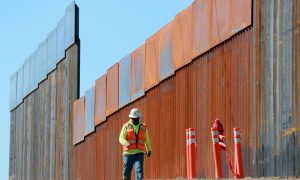 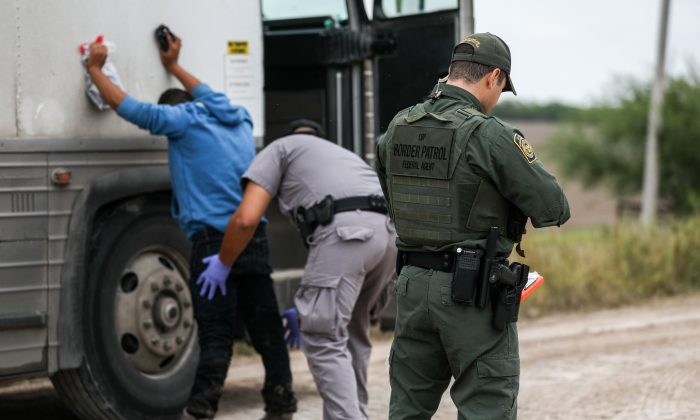 Border Patrol agents caught 4,117 people who were either trying to cross the U.S.–Mexico border illegally or through a border crossing on March 26.

It was the most apprehensions in a single day in the past 10 years, according to Commissioner of U.S. Customs and Border Protection (CBP) Kevin McAleenan.

McAleenan made the point during a March 27 press conference in El Paso, Texas.

“Two weeks ago, I briefed the media and testified to Congress that our immigration system was at the breaking point,” he said. “That breaking point has arrived this week.”

He estimated the agency will conclude the month with some 90,000 caught trying to cross the border illegally—up more than 140 percent from the year before and the most since 2008.

Two-thirds of the inflow are children and families from Central America, “a big difference,” McAleenan said, from the high numbers in the 1990s and 2000s.

“The last time we had crossings near this level, they were almost all adults from Mexico who could be swiftly repatriated,” he said, while now the families and children, commonly asking for asylum, are “almost guaranteed to be released to remain in the U.S. indefinitely” despite the fact that 85–90 percent of them will eventually have their asylum claim denied.

With more than 13,000 migrants in custody—an unprecedented number and more than twice what CBP considers a “crisis level”—McAleenan said, calling the situation an “unprecedented humanitarian and border security crisis all along our southwest border.”

The overcrowding of CBP facilities have caused the agency to start directly releasing some migrants caught at the border, instead of transferring them to Immigration and Customs Enforcement (ICE), which itself doesn’t have sufficient detention capacity to accept them.

This is the first time in more than a decade that the CBP has had to directly release its detainees and is trying to pick those with the lowest risk, McAleenan said.

Directly profiting from the situation are the criminal organizations that control the human smuggling channels.

“The same criminal organizations that are smuggling migrants, profiting from them, abusing them on the journey, are benefiting from our reduced security presence,” McAleenan said. “They’re bringing drugs, they’re bringing adults who are trying to evade capture behind those families as we’re bogged down with large groups.”

He said that 35 percent of those caught attempting to cross illegally “are still single adults who try to evade apprehension at our border and within that flow, there are thousands of criminals, smugglers, gang members, and public safety threats.”

The “humanitarian crisis,” as President Barack Obama called it in 2014 during the first influx of unaccompanied Central American minors, is pulling the CBP’s personnel from its primary function and competence of guarding the border, officials said.

In El Paso and other “key sectors,” up to 40 percent or more of CBP personnel care for the families and children, including medical care, transportation, and processing, McAleenan said.

“That means our security posture at the border is negatively impacted.”

He described CBP quarantine cells set up to isolate migrants with flu, chicken pox, and lice.

“We’re not trained to do what we’re doing nowadays. We’ll do it because we’re humans, but that’s not what we were trained to do. Our job is to protect the border,” Ramiro Cordero, Border Patrol special operations supervisor in the El Paso sector, told The Epoch Times in an interview earlier in March.

McAleenan mentioned cases of infants with high fevers, a 2-year-old suffering seizures in a desert, a 19-year-old woman with a heart defect requiring emergency surgery, a man with multiple organs failing still trying to refuse medical care—all in the previous four days.

“Our expanded medical efforts are saving lives, but they come at a high cost to our enforcement mission,” he said.

He said the CBP is pulling 750 agents from border crossings to help care for the migrants.

“There will be a slowdown in the processing of trade, there will be wait times in our pedestrian and passenger vehicle lanes,” he said.

McAleenan blamed court decisions and flawed laws for the growing influx, which is projected to reach 1 million border apprehensions in fiscal 2019.

“Changes in the law and closing the vulnerabilities in our legal framework is the only way that this flow is going to be reduced and we’re going to be able to restore integrity to our immigration system,” he said.

“Right now, we are not able to even reach the claims of legitimate asylum seekers. Our courts tell us that 10–15 percent of Central American migrants have a legitimate asylum claim at the end of the process. Those people won’t even see a judge now for 2–5 years or more to have that asylum claim adjudicated because this economic migration—which it primarily is: fleeing poverty, fleeing difficult conditions, food insecurity, especially in the western highlands of Guatemala and in rural areas of Honduras—is overwhelming that legitimate asylum population. That’s a broken system.”

He said the Trafficking Victims Protection Reauthorization Act of 2005 needs to change to allow repatriation of children to countries that don’t share a border with the United States, which the law prohibited due to human trafficking concerns.

“For unaccompanied children, we have government partners in the Northern Triangle—El Salvador, Guatemala, Honduras—who are ready to take children back and handle that humanely,” McAleenan said. “Those are their citizens they believe they have a responsibility for and we’re not allowed to do that under the law, under the Trafficking Victims Protection Reauthorization Act.”

The government also needs to overcome a court decision that has blocked the government from keeping families with children in detention.

“We need to be able to detain families together for a short period of time, 4–8 weeks to go through an immigration court proceeding. If they don’t have a valid claim, we’ll repatriate. If they do, they’ll be released with certainty that they have asylum, with the ability [to] plan, to invest in a business, to make choices for schools. Right now they don’t have that. They live with uncertainty for years at a time because the system is broken and overwhelmed.”

The two changes are “urgently” needed and “would make an immediate impact,” he said, pointing to the reduction of the influx after 2014.

“When [the Department of Homeland Security] started to repatriate families that didn’t have a valid claim, the numbers went down immediately,” he said. “We don’t have the ability to do that due to court decisions that have come subsequently.”