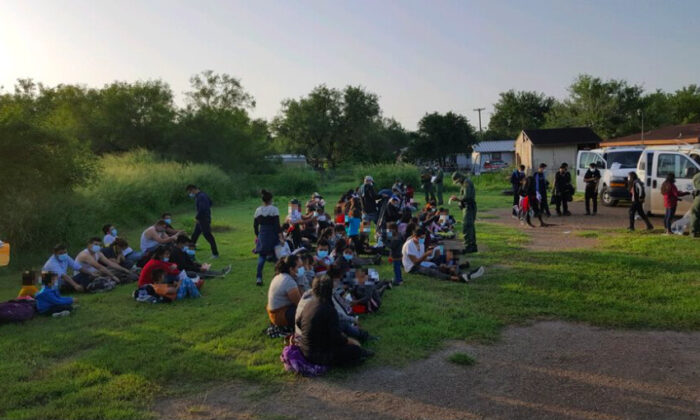 South Texas’s Rio Grande Valley has been the busiest border sector for illegal alien crossings for years. But last week a sudden spike in numbers saw Border Patrol apprehend more than 20,000 illegal immigrants in one week.

“It’s the hottest part of the summer and apprehensions are skyrocketing!” Border Patrol Chief for the sector Brian Hastings wrote on Twitter on July 25.

Hastings said the number of large groups has increased, with a record-breaking 298 in one group encountered in La Grulla last week.

“Within this group, a subject exhibiting COVID-19 related symptoms was transported to the hospital. At the hospital, the migrant tested positive for COVID-19,” a press release from Customs and Border Protection (CBP) stated.

The most recent large groups have mostly contained citizens from Guatemala, Honduras, El Salvador, Venezuela, and Nicaragua, according to CBP.

Border Patrol processing facilities in the region are once again overwhelmed and illegal immigrants are staying overnight on buses outside the facilities due to overcrowding, according to a source in the Rio Grande Valley.

In the Del Rio Sector, which has become the second-busiest for Border Patrol apprehensions, illegal immigrants are sleeping outside between the Rio Grande and the border fence as the agency struggles to find transport and space to put them.

On the morning of July 25, agents were dealing with around 350 illegal immigrants who had crossed within the last 18 hours—mostly Haitians, but also Cubans, Colombians, and a couple from Ghana.

Several Haitians told The Epoch Times they had arrived across the river at 3 p.m. the day prior and slept outside while waiting for transport. A couple from Ghana said they crossed at 3 a.m. and slept in a nearby tree-covered area.

Meanwhile, between the two sectors, in the city of Laredo—where busloads of illegal immigrants from the Rio Grande Valley are being sent—officials have sued the Biden administration to stop the transport of more illegal immigrants into the city.

By June, Border Patrol had apprehended more than 1 million illegal immigrants along the almost 2,000-mile southwest border. Each month this year has seen an increase in apprehensions, with no sign of it dropping off as the focus from headquarters is on speeding up the processing.

Border Patrol Chief Raul Ortiz said in late June that agents had detected, but not captured, a further 250,000 illegal immigrants so far this fiscal year.

Title 42—which is the public health emergency measure allowing Border Patrol to quickly turn back to Mexico some single adults—is largely seen as the remaining vestige of border control. The measure is expected to be removed imminently and Border Patrol is bracing for an even bigger influx as single adults would then need to be placed through a much longer process under Title 8 immigration proceedings and likely many will be released into the United States.