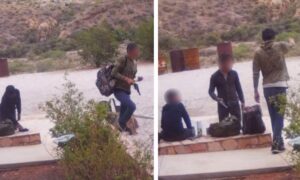 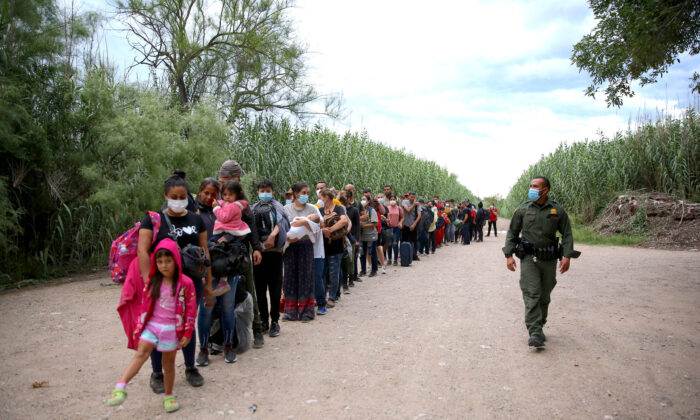 Border Patrol agents have continued to apprehend an increasing number of illegal aliens each month this year, and June was no exception.

Agents apprehended 188,829 people illegally crossing the border in June, up from 180,034 in May, according to Customs and Border Protection (CBP). That averages 6,294 apprehensions per day for the month.

The number of illegal aliens detected by Border Patrol but who evaded capture isn’t released, although Border Patrol Chief Raul Ortiz said on June 24 that the number has exceeded 250,000 so far this fiscal year.

The number of people who pass undetected is impossible to estimate.

A major change to the current border flow is expected after July 21 if Title 42 is revoked, which is largely seen as the remaining tool holding back the floodgates. Title 42 allows for Border Patrol to turn back illegal border crossers almost immediately as a pandemic measure, rather than be placed in ICE custody for a more protracted process through deportation proceedings under Title 8.

“When we do lose Title 42, the number of people that were previously being expelled are going to have to be processed under Title 8, and we’re going to be spending more time with them,” Texas’s Del Rio Sector Chief Austin Skero told The Epoch Times on July 15.

Currently, single Spanish-speaking adults and some families are still subject to Title 42 and are turned back to Mexico. Once the policy is lifted, border facilities are likely to be quickly overwhelmed.

“Title 42 is absolutely critical,” Immigration and Customs Enforcement (ICE) Acting Director Tae Johnson said during a congressional hearing on May 13.

“There’s certainly some gaps in our ability to track” illegal immigrants after they’re released, he said.

Under the agency’s narrowed criteria for priority removal, most of those who abscond won’t be a priority for ICE to track down unless they commit an aggravated felony.

“It includes speeding up the process so we’re not bogged down in these communities,” Ortiz said in Del Rio on June 24.

He said a quicker electronic system to process aliens will be rolled out in about 90 days.

“[Agents] should be able to do everything on a tablet, they sign it, you move on,” he said.

Skero told The Epoch Times that a soft-sided, 500-person processing tent had been erected in Eagle Pass to help mitigate the anticipated increase.

“One of the difficulties that we have here in the sector is managing the flow of people that are coming, managing detention and the processing, and the distribution,” he said.

“But the reality is, even now, we don’t have enough people.”