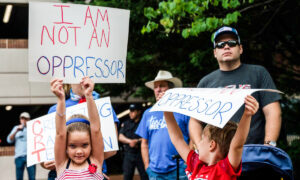 Border Patrol: ‘Anything Is Possible’ as Migrants Gather in Tijuana

IMPERIAL BEACH, Calif.—Border Patrol agents, with the help of the U.S. military, are ready for all scenarios as hundreds of migrants start to gather on the south side of the U.S.–Mexico border near San Ysidro, California.

Tekae Michael, Border Patrol public affairs officer for the San Diego Sector said activity has been “pretty stagnant” on the United States side of the border so far.

But, on the Mexico side, more individuals are gathering, “which isn’t normal,” she said on Nov. 15.

Several hundred members of the lead migrant caravan have already reached Tijuana, Mexico, while the main group of 5,000 continued to advance north through Mexico.

Tekae said Border Patrol tactical units are already deployed, and along with the U.S. military, Border Patrol agents are getting the support they need.

“We’re basically making sure we’re prepared for anything that does happen.”

The Marine Corps of Engineers was installing concertina wire along the fence at Imperial Beach on Nov. 15, while small crowds gathered on the Mexican side to watch.

Ralph DeSio, spokesman for U.S. Customs and Border Protection, said the individuals ran back to Mexico “without needing any intervention” from Border Patrol agents.

Tekae said it’s possible a large group of migrants could rush the border and overwhelm agents in the coming days, but the agency is prepared.

“Anybody coming to claim asylum into the United States—the legal way to do it is through a port of entry and presenting yourself and asking permission to come in. If you do choose to cross illegally in between a port of entry, you will be arrested and you will be prosecuted.”

Tekae said her agency is also working closely with their Mexican counterparts.