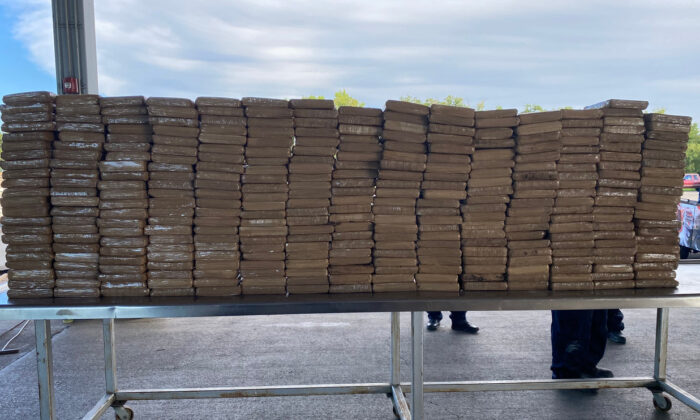 Packages containing 1,337 pounds of methamphetamine seized by CBP officers at Del Rio Port of Entry in Texas on Sept. 5, 2022, in a photo released on Sept. 7, 2022. (CBP)
Immigration & Border Security

U.S. Customs and Border Protection agents are seizing record amounts of fentanyl and meth in Arizona and Texas brought in by Mexican cartel operatives and foreign nationals trying to enter the United States illegally.

Among them, officers seized 12,000 rainbow-colored fentanyl pills, four pounds of fentanyl in powder form, 34 pounds of methamphetamine and five pounds of marijuana.

On Aug. 22, agents seized the second-largest amount of fentanyl in U.S. history at the Nogales Port of Entry.

Through an inspection of an 18-wheeler, they discovered in a trailer floor compartment 1.27 million pills and 104 pounds of cocaine. In the vehicle’s floor, they also found about 300,000 pills, two pounds of fentanyl powder, 13 pounds of heroin and 10 pounds of cocaine.

The record amounts confiscated were reported after seizures of fentanyl at the southern border jumped over 200 percent in July.

In that month alone, federal agents seized more than 2,100 pounds of the illicit drug, the highest amount seized in at least the last four fiscal years. It was up 202 percent from the 640 pounds of fentanyl seized in June.

In April, agents seized 1,300 pounds of the drug, according to CBP data.

In the El Paso Sector of Texas, CBP Director of Field Operations Randy Howe said agents in his sector alone confiscated more than 3,000 pounds of cocaine, 133 pounds of marijuana, made 42 arrests, and confiscated an estimated street value of $23.1 million worth of narcotics in seven days this month.

On Sept. 1, agents seized 545 pounds of cocaine at the Port of Laredo worth an estimated street value of $4 million.

Laredo officers also recently uncovered $11.8 million worth of cocaine that was described as a shipment of baby wipes.

A driver of a 2016 Stoughton trailer manifesting a shipment of baby wipes was identified for inspection at the Columbia-Solidarity Bridge attempting to enter Texas from Mexico. The driver was flagged by a canine and non-intrusive inspection system examinations.

Once officers inspected the cargo, they discovered 1,935 packages containing 1,532.65 pounds of cocaine.

Port Director Alberto Flores said the seizure “is a prime example of border security management and how it helps prevent dangerous narcotics from reaching our communities.”

But not all narcotics being smuggled into the United States are discovered.

Fentanyl is the leading cause of death of adults in the United States between the ages of 18 and 45. In 2020, 77 percent of all teen overdose deaths involved fentanyl, according to a study published by JAMA.