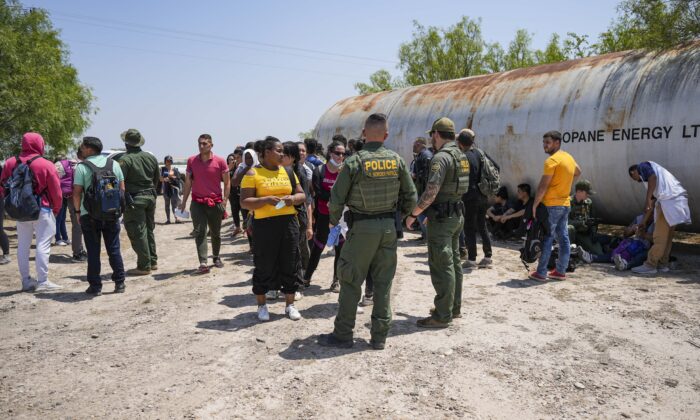 Ortiz made the announcement on Twitter on Sept. 6, saying that border agents had encountered 2,690 illegal immigrants including 10 large groups in the last three days. Among them were 10 sex offenders, four gang members, and a murderer.

“The dangers are real,” Ortiz wrote. “Great work by our agents.”

Ortiz’s latest report comes as U.S. Customs and Border Protection (CBP) agents are on pace to apprehend more than 2 million illegal aliens in this fiscal year, which runs from October to September. Border Patrol agents have arrested 9,381 convicted criminal aliens and stopped 627 gang members this fiscal year, and seized nearly 553,000 pounds of drugs.

In mid-August, the Federation for American Immigration Reform reported that nearly 4.9 million illegal aliens, including some 900,000 “gotaways,” have crossed the U.S. border since President Joe Biden took office.

Ortiz attributed Biden’s “no consequences” immigration policy to the U.S. southern border crisis, in a July deposition for a lawsuit against the Department of Homeland Security brought by Florida Attorney General Ashley Moody.

The chief also issued a three-day report on Sept. 1. According to his Twitter post, he said agents encountered 2,813 migrants including 14 large groups. Among them were seven sex offenders, two gang members, two murderers, and two felons. Agents also seized 29 pounds of fentanyl, 50 pounds of cocaine, and 71 pounds of methamphetamine.

Fentanyl, a synthetic opioid and Schedule II controlled substance, is 100 times more potent than morphine and 50 times more powerful than heroin. It was responsible for 71,238 of the record 107,622 fatal drug overdoses in the United States in 2021, according to the U.S. Centers for Disease Control and Prevention.

Two criminal drug trafficking organizations, the Sinaloa Cartel and the Jalisco New Generation Cartel, supply most of the fentanyl in the United States.

In response to the fentanyl seizure, Republican lawmakers took to Twitter to criticize Biden on Sept. 6.

“This weekend, over 230,000 deadly fentanyl pills that could be mistaken for candy by children were seized at the Port of Nogales,” Sen. Jim Risch (R-Idaho) wrote. “The President needs to send a clear message to criminal organizations and secure the southern border.”

“The Biden border crisis is endangering ALL Americans by allowing poisonous fentanyl that is being targeted toward children to invade our communities,” House Republicans wrote.