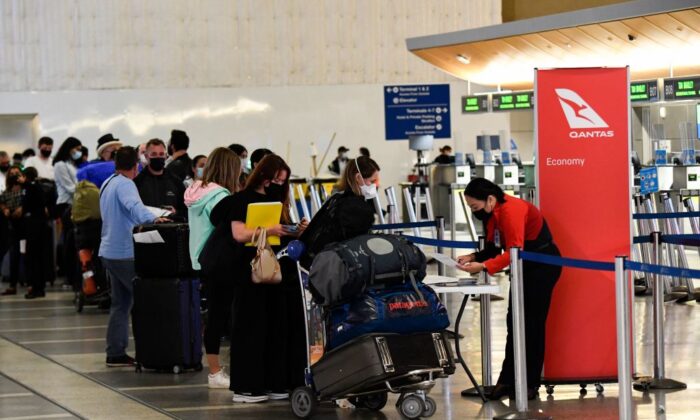 Travelers wait in line to verify their Covid-19 vaccination status as they check-in for a flight to Sydney, Australia at Los Angeles International Airport in Los Angeles, California, on Nov. 1, 2021. (Patrick T. Fallon/ AFP via Getty Images)
Australia

Border Closures Cause Trouble for Australian Employers Looking for Staff

Closed international borders due to the COVID-19 pandemic and a plunge in skilled migration have resulted in a loss of $32 billion (US$22.9 billion) to the Australian economy as 380,000 fewer people had entered the labour force, a new study found.

The joint study by RMIT Online and Deloitte Access Economics also pointed out that the Australian economy could have enjoyed an additional growth of $148 billion (US$106 billion) had the pandemic not existed.

“The closure of international borders brought Australia’s migration to a virtual standstill and has exacerbated the talent shortage in Australia,” the study released on Feb. 8 showed.

It also warned that the impacts from the closure of Australia’s international borders were not a temporary impediment. And if the government did not take any action, the economy would permanently decrease in size compared with what it would have been without the pandemic.

“This means that reverting to pre-pandemic trends isn’t enough. Instead, even stronger growth is needed to correct for losses incurred during the pandemic,” the study results read.

A quarter of the surveyed employers attributed border closures to one of the key barriers preventing them from attracting new staff.

According to a survey of 413 business leaders and 1,040 workers from mid-size and large companies in several Australian industries, over 50 percent of Australian employees have taken action to change their current employment.

“It’s no secret that employers across Australia are struggling to find great people with the right skills,” RMIT Online’s CEO Helen Souness said.

“In some industries, such as technology, big companies are raising salaries to attract talent and making it even harder for smaller businesses and startups to hire. We need to increase upskilling and open the borders to change this situation.”

Nearly three-fourths of the employers participating in the survey had difficulties attracting new staff, with 27 percent citing border closures as the most common obstacle.

Meanwhile, the study revealed that digital skills were growing in importance in all work areas, with Australian employers being willing to pay a wage premium for workers with digital skills.

A job advertisements analysis in 2021 showed that digital skills ranked third among the most requested skills, ahead of core areas like sales, budget management, and business processes. However, customer service and project management occupied the top two positions.

The study also highlighted the importance of upskilling in the labour market.

“Employers anticipate they will spend more on upskilling over the next year, and employees value this investment, with many noting that it is a sign their employers want to invest in them, and they care about their development.”