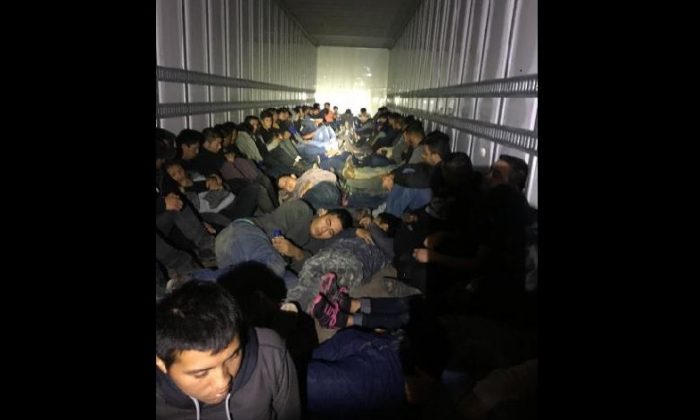 The situation took place at a Border Patrol checkpoint on Highway 83 in Laredo.

The driver of the rig was questioned regarding his immigration status.

Further inspection in the secondary lane led to the discovery of dozens of illegal immigrants inside the trailer.

The 76 people were determined to be from Mexico, Honduras, El Salvador, and Guatemala, according to a news release.

Of the 76, 13 were unaccompanied children.

The driver has not been named but was arrested and identified as a U.S. citizen.

“These criminal organizations view these individuals as mere commodities without regard for their safety. The blatant disregard for human life will not be tolerated. We will continue to work with our law enforcement partners to disrupt and dismantle these organizations and prosecute those responsible,” said Laredo Sector Assistant Chief Patrol Agent Gabriel Acosta in a statement.

The patrol said its latest initiative is to warn against the dangers of people crossing illegally into the United States.

Inside, 10 undocumented immigrants were dead from overheating.

The air-conditioning and ventilation systems were not operating.

Also inside were 30 others who survived the ordeal.

The current case from Laredo is still being investigated.