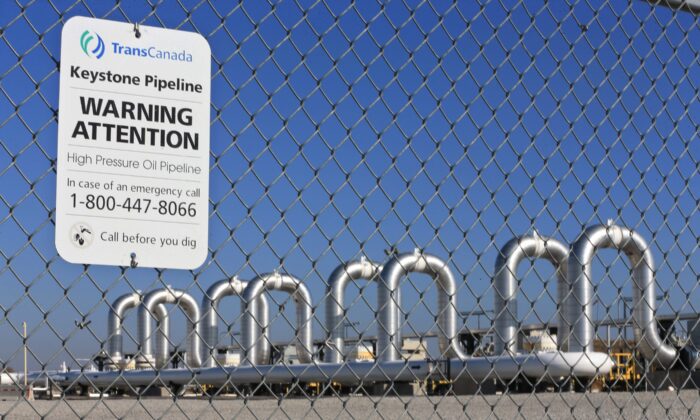 The Keystone Steele City pumping station, where the planned Keystone XL pipeline was to connect to, in Steele City, Nebraska, in a file photo. (Nati Harnik/The Canadian Press/AP)
Executive Branch

A video clip featuring Cotton was played during the program, in which the lawmaker argued for cracking down on the Russian energy sector by re-imposing sanctions and lifting restrictions on the domestic production of oil and gas. The United States can begin drilling on federal lands, put out new leases, and re-open the Keystone Pipeline, he said. This will bring in more oil into the United States daily from Canada than what America imports from Russia.

However, Psaki dismissed Cotton’s suggestions during the Feb. 27 interview.

“I would say that the congressman’s recommendations there, the Keystone Pipeline, was not processing oil through the system. That does not solve any problems. That’s a misdiagnosis, or maybe a misdiagnosis of what needs to happen,” Psaki said. President Joe Biden revoked the permit for the pipeline during his first week in office.

Psaki also pushed for America to explore alternative sources of energy rather than solely focusing on oil. “I would also note that, on oil leases, what this actually justifies, in President Biden’s view, is the fact that we need to reduce our dependence on foreign oil, on oil in general, and need to look at other ways of having energy in our country and others.”

Psaki confirmed that energy sanctions against Russia “remain on the table” and pointed out that European countries are recognizing the need to cut down their own reliance on Russian oil.

Biden wants to maximize the impact of sanctions on Russia while ensuring that such sanctions have little impact on America and other nations, Psaki said.

Russia was America’s biggest source of refined petroleum products in 2021. Moscow accounted for 21 percent of U.S. gasoline imports. The present rally in crude oil prices means that any sanction on Russia, a major producer, can spike up prices significantly, and add to the ongoing inflation woes. As such, Washington is in a tricky position when it comes to sanctioning Russia’s energy exports.

But like Senator Cotton, other lawmakers have proposed that the United States start building up its domestic oil production. Representative August Pfluger (R-Texas) believes that such a move will better serve America and its allies. He called the Permian Basin, located in the southwestern part of the United States, “the most prolific production area in the entire world” in a Friday interview with CBS7.

“We must unleash and innovate to make sure the production continues to be strong, that we regain our dominance on the world stage in the oil and gas we supply, not only for our domestic needs but also our partners and allies so that they’re not dependent on maligned actors like Russia and China,” Pfluger said.