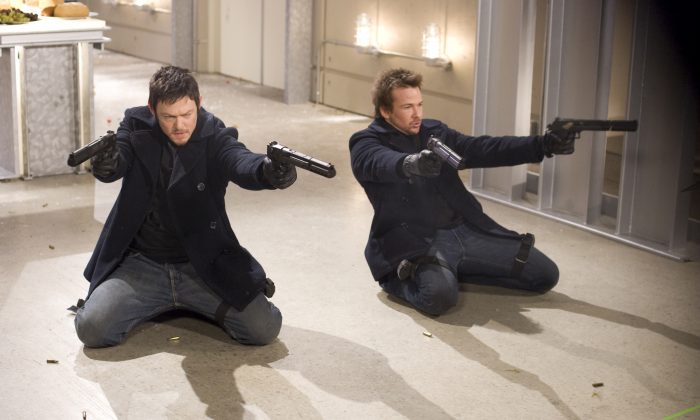 In this film publicity image released by Apparition Films, Norman Reedus, left, and Sean Patrick Flanery are shown in a scene from "The Boondock Saints II: All Saints Day." (AP Photo/Apparition Films)
US

New details about Boondock Saints 3 have just come out following writer and director Troy Duffy revealing pages of the script ealier this year.

Duffy took to Facebook recently to answer questions from fans, many of which had to do with the third addition to the Norman Reedus- and Sean Patrick Flanery-led franchise.

Duffy told a fan that he wants to reclaim the “boots on the ground” feel of the first film and that Boondock 3 will find the brothers having a newfound “notoriety” since entering prison, reported Flickering Myth.

He also said the movie will delve a lot into the McManus brothers’ past and flashback to the “very first crime” for those God loving, hard drinking criminal killing duo.

Duffy also admitted that it’s his fault that it’s taken so long for the third film to get off the ground, because he wants to get it right.

He also revealed that the third film will be titled “The Boondock Sants 3: Legion” and that the movie will show legions of people taking the law into their own hands and following in the footsteps of the now famous brothers from Ireland.

There’s no release date pegged yet for the film, but Reedus and Flanery are both expected to be back.

Reedus even told Comic Book at Comic-Con last year that he tried to plant a Boondock Saints joke in The Walking Dead.

“You know what I did?” Reedus said. “It got cut, but when we were in the car last season, and we’re driving–we come out and he hears the phone call? I picked up stuff–I picked up a bunch of rope, wondering if people would pick that up. And it got cut out, but there was a thing which I don’t even know if I told anyone.”