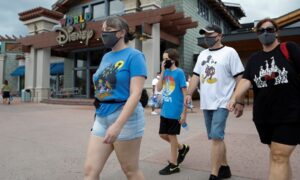 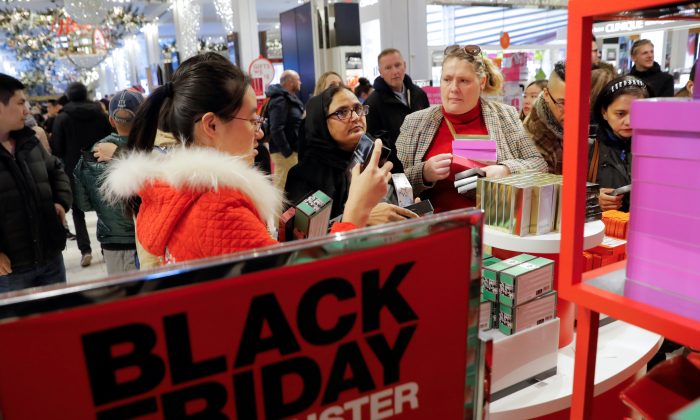 WASHINGTON—Retailers expect a blockbuster holiday shopping season this year, thanks to positive consumer sentiment driven by tax cuts, among other factors.

Industry-watchers expect a 4 to 5 percent surge in holiday retail sales, but warn of potential price increases next year.

Retailers are taking advantage of strong demand during the winter holidays, the most competitive shopping season of the year. According to a survey by the National Retail Federation (NRF), consumers will spend an average of $1,007, up 4.1 percent from a year ago.

“Confidence is near an all-time high, unemployment is the lowest we’ve seen in decades, and take-home wages are up. All of that is reflected in consumers’ buying plans,” NRF President and CEO Matthew Shay said in a press release.

The U.S. economy had strong second and third quarters this year, with gross domestic product (GDP) surging 4.2 percent and 3.5 percent, respectively. Wages have begun to grow in recent months, and the unemployment rate has fallen to the lowest level in nearly 50 years.

Positive economic momentum boosted both business and consumer confidence. Consumer spending—which accounts for about 70 percent of the GDP—recorded a 4 percent increase, the highest since the fourth quarter of 2014.

Strong consumer sentiment, coupled with low unemployment, increasing wages, and lower tax rates, boosted consumer spending in recent months. And that momentum is expected to continue through the fourth quarter.

Consumers will spend a total of more than $700 billion during this holiday season, the NRF estimates. The spending will go to gifts and other holiday items such as food, decorations, flowers, and greeting cards. In addition, there will be a lot of non-gift purchases, as consumers try to take advantage of the deals and promotions throughout the season.

Increased tariffs on a wide range of consumer goods from China took effect in recent months. Retailers, however, imported record volumes of merchandise this summer ahead of the tariffs, according to the NRF. Hence, the effect of tariffs on pricing during the holiday season is expected to be minimal.

Another survey by consulting firm PricewaterhouseCoopers (PwC) found that consumers plan to spend an average of $1,250 during the holiday season on “gifts, travel, and entertainment,” an increase of 5 percent over last year.

“So, it should really be a win-win across the board,” he said.

Individual tax cuts put more money into consumers’ pockets, and the retail sector has been the primary beneficiary of the increase in disposable income over the past year.

The results came as a surprise, especially given the headlines about retail bankruptcies, store closures, asset sales, and layoffs.

Many retailers have been struggling in recent years with weak sales and profits as they lost foot traffic to online stores.

The ones that have poured money into digital platforms, such as Wal-Mart and Target, have managed to weather the storm and boost market share. Digital sales have become a key growth driver for many traditional retailers in recent years.

According to Barr, there would be another “explosive growth” in digital commerce this holiday season. He expects overall online sales to grow 15 to 20 percent. Some leading retailers are experiencing growth of more than 40 percent in digital sales, he said.

The share of e-commerce in total retail sales is around 10 percent, according to market estimates.

“But if there is a sustained decline in the overall capital markets, that has the possibility of impacting consumer sentiment,” he warned.

Heading into 2019, rising prices may affect the positive sentiment, with the concerns of many retailers centered on the U.S.–China trade war and wage increases.

Despite the increase in sales, the retail sector is challenged from an overall profitability standpoint. A labor shortage, especially in logistics and transportation, is affecting retailers’ operations.

“They are having a hard time finding workers for the warehouses and drivers for the trucks, and the only way that they’re able to compete is to increase wages,” Barr said.

The ongoing trade war with China and tariffs are also creating an uncertainty for retailers.

Although retailers haven’t yet boosted prices, increases in wages and tariffs may eventually be reflected in pricing. Higher prices may cause consumers to retreat on spending.

The Federal Reserve signaled that there would be further rate increases in December and next year. That’s bad news for the sector as higher rates mean higher borrowing costs for retailers that have significant debt loads.