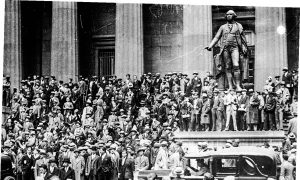 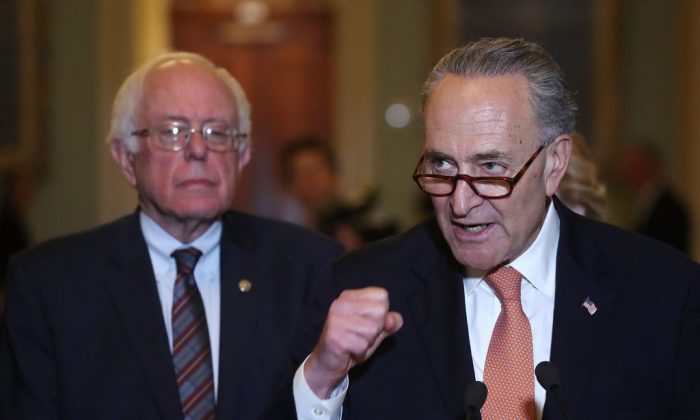 Boom in Stock Buybacks Stirs a Hot Debate in Washington

Amid growing uproar from lawmakers, share buyback spree continues in 2019
By Emel Akan

WASHINGTON—Stock buybacks have come into focus recently as lawmakers on both sides of the aisle have scrutinized the practice. The nation’s largest business organization, however, rejects the arguments against buybacks, calling them “misguided.”

Senate Minority Leader Chuck Schumer (D-N.Y.) and Sen. Bernie Sanders (I-Vt.) introduced legislation early in February that aims to prevent stock buybacks. They claim that corporations should be banned from purchasing their shares unless they satisfy certain requirements for their workers, including a minimum wage of $15 per hour, paid sick leave, and health benefits.

In a New York Times op-ed published on Feb. 3, the senators claimed that more than 90 percent of corporate profits went to share buybacks and dividends between 2008 and 2017.

“This practice of corporate self-indulgence is not new, but it’s grown enormously,” the senators wrote, adding that buybacks were further boosted by the Trump tax cuts in 2018.

According to the U.S. Chamber of Commerce, however, lawmakers don’t understand how the buyback system works.

“These objections to stock buybacks are, in a word, misguided,” Tom Quaadman, the executive vice president of U.S. Chamber Center for Capital Markets Competitiveness, wrote in a blog post.

“Critics’ complaints rest on the premise that they maximize shareholder earnings to the detriment of workers and at the expense of investments in the company. But this reflects a fundamental misunderstanding of how stock buybacks work.”

According to Quaadman, stock buybacks don’t just benefit company executives and the wealthy but also retirement account holders. It also helps the broader economy by delivering cash to innovative public and private companies that need capital.

Quaadman argued that U.S. companies make the most productive decisions based on the capital they have, without the “heavy hand of one-size-fits-all government mandates.” He also defended tax reform, stating that the tax cuts increased hiring and employee benefits.

Kevin Hassett, chairman of the White House’s Council of Economic Advisers, also criticized Schumer and Sanders for coming up with “economically illiterate” proposals for political reasons. He argued that the proposal was “very harmful for the economy.”

“I just wish that some sentient economists would go talk to these guys and explain to them how buybacks work, how capital markets work,” he told the CNBC on Feb. 4. “They should really be ashamed of themselves.”

Stock buybacks, or repurchases, occur when companies buy back their own shares off the market. This action reduces the number of outstanding shares in the market, resulting in an increase in the price per share.

Amid the growing uproar from lawmakers, the stock buyback spree continues in 2019. Six weeks into the year, American companies announced plans to spend $140 billion to repurchase their own shares, up 28 percent from a year ago, according to a Bloomberg report.

Stock buybacks are at record levels. However, they did not start with the Tax Cuts and Jobs Act. There has been a consistent and significant rise in the share buyback practice in the last three decades, according to the Roosevelt Institute, a liberal think tank.

A report by the institute stated that during the last decade and a half, 94 percent of corporate profits went to shareholders in the form of buybacks and dividends, leaving little money “for employee compensation or investment.” And this forms the basis of the argument by Schumer and Sanders against buybacks.

Harvard researchers Jesse Fried and Charles Wang, however, believe that the scale of the problem is overstated.

In a Harvard Business Review article published in November last year, Fried and Wang wrote that S&P 500 companies distributed nearly $7 trillion to shareholders through buybacks and dividends from 2007 to 2016. However, these firms received, directly or indirectly, $3.3 trillion of equity capital from shareholders during the same period. Hence, the net shareholder payouts were only about $3.7 trillion, or 50 percent of these companies’ net profit, they argued.

Sen. Marco Rubio (R-Fla.) also joined the share buyback debate, saying that he would soon introduce a bill to disincentive the practice. He said that buybacks should be taxed the same way as dividends.

“I don’t want to ban buybacks. If firms don’t have investments worth making, they can still return cash to shareholders,” he wrote on Twitter on Feb. 14.

“But why give buybacks a tax preference? Let’s tax them same as dividends & give preference to productive investments.”