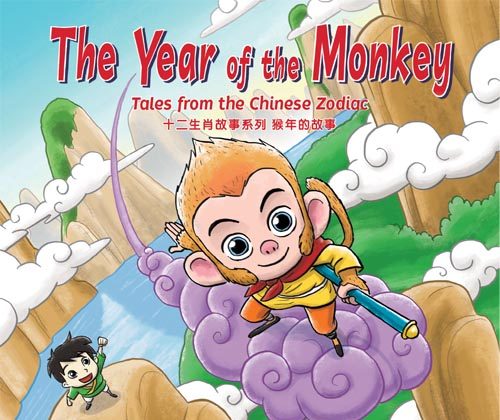 The old and new
By Linda Wiegenfeld
Print

The Chinese New Year is fast approaching and gives us a chance to introduce children to a different culture through books. Here are some selections that will help your children enjoy this season.

I’ve also added a few books based on Chinese folktales and fairy tales—stories handed down from generation to generation. To paraphrase a song that I remember: the new is silver and the old is gold.

People born in a certain animal year are believed to have attributes of that animal.

What is the Chinese New Year about? Astrology plays a significant role in Chinese culture. The depiction on a circular chart of 12 different animals represent the 12-year cycle of the Chinese lunar calendar, which has been in existence for over 5,000 years.

People born in a certain animal year are believed to have attributes of that animal. The Chinese year 4,714 begins on Feb. 8, 2016, and is the Year of the Monkey.

‘Tales from the Chinese Zodiac’

An interesting series for children published by the Immedium Publishing Company, a company which specializes on books from the Asian American culture, is “Tales from the Chinese Zodiac” by Oliver Chin.

Oliver Chin has made a commitment to write one story each year on the animals of the Lunar New Year. His latest book “The Year of the Monkey: Tales from the Chinese Zodiac” was the 11th in what will be a series of 12 books. It was also the first book in the series with a bilingual English-Chinese text.

Oliver Chin envisions his books as a “blending of astrology, cultural mythology, with concepts for the modern day.” This is a lofty vision statement, but I believe that he truly succeeds in his goal.

All the “Tales of the Chinese Zodiak” are very unique adventure picture books. They have bright vivid drawings which have a distinctive Chinese look.

Most of the artists who illustrated the books in the Zodiac Series were animators and the feeling of movement is reflected in their drawings.

The books have an Asian-American theme that is appealing to most children no matter what the gender or background of the child is.

Each book has a problem associated with the animal of the year and shows how that animal has to use its special characteristics from the Chinese Zodiac to overcome the dilemma. For example, in “The Year of the Dog,” a dog needs to learn how to become man’s best friend. He does so by using the traits of that year: being honest and loyal.

In “The Year of the Pig,” in spite of being quite messy, a pig discovers she has the unique qualities to find a jade ring.

In “The Year of the Monkey,” a playful monkey discovers how focus, practice, and teamwork can lead to success in the sport called jianzi.

At the back of each book is an explanation of character traits for the character born in that year.

Another book that will really enhance children’s enjoyment of the Chinese culture is “New Year is Dragon Dance: A Chinese New Year” by Joan Holub.  This is a great book for a Chinese New Year discussion with some interesting lift-the flap additions. I love that a Chinese zodiac is included. Best of all there are directions to make a dragon puppet that requires only basic supplies to assemble.

‘Sam and the Lucky Money’

Many books on the Chinese New Year are nonfiction, but “Sam and the Lucky Money” by Karen Chinn is fictional and it gives a real flavor of what it’s like in an urban Chinatown during Chinese New Year.

Sam, a young boy, has been given the traditional gift of lucky money in small red envelope called leisees.  He can spend the money however he wants. Sam goes to Chinatown with his mother to decide what to buy and the reader sees Sam’s many choices. While he is deciding, Sam comes across a man with bare feet. Sam decides to gives him the money. Sam gets great joy from giving to others and realizes that he is a lucky boy. An extremely touching book!

No celebration of Chinese New Year would be complete without some Chinese folktales and Chinese fairy tales. Sometimes it is hard to tell the difference, but I think of “folktales as containing ordinary human beings and everyday problems of life whereas fairy tales contain fairies, other super natural creatures, and their magical world full of fantasies.”

‘The Weaving of a Dream’

Lovely, richly detailed illustrations are the main attraction of the fairy tale called “The Weaving of a Dream” by Marilee Heyer. The pictures seem beautiful enough to display at a museum of art. The story is simplistic and typical of a fairy tale but still interesting to read.

A widow weaves brocades to support her three sons. At the market one day, the widow sees a beautiful painting of a palace, and instead of trading her brocades for food, she trades for the painting.

The widow then decides that she desperately wants to live in the palace but since that appears to be impossible, her son tells her to copy this picture into the brocade.

After three years of focusing on this task, the widow finishes. A wind then comes and blows the brocade away to the fairies. The widow then sends her sons out one by one to get the brocade back. The widow’s two oldest sons fail and never return as they fall prey to fear and greed.

The third son succeeds in returning the brocade to his mom but it is different because a fairy has woven herself into the brocade. Suddenly the brocade comes to life, and the widow, the youngest son, and the fairy— who the son marries—get to live in a real palace for the remainder of their days. The two older sons who failed in their mission become beggars.

“The Five Chinese Brothers” by Claire Huchet Bishop is also an interesting fairy tale. In this book, good triumphs over evil.

Five identical Chinese brothers each have different super powers: one can swallow the sea, one had an iron neck, one could stretch and stretch his legs, one could not be burned, and one could hold his breath indefinitely. The brothers use their abilities to save one of the brothers from a false charge.

The illustrations go nicely with the story to portray a simpler, more innocent time. The timeless messages of the book are that people should work together to fight injustice and that children need to respect the judgment of those who are wise in the ways of the world.

There have been a few adaptations of this book to make it fit today’s ideas, but I prefer this book which is more reflective of the original thinking of the time.

‘The Lost Horse: A Chinese Folktale’

“The Lost Horse: A Chinese Folktale” by Ed Young and Tracey Adams is a retelling of an ancient folktale.

Finally, all able-bodied men are taken to war, but the man’s son is left behind because of his injuries. Many men are lost in battle. Father and son survive to take care of each other and live out their days finding harmony in taking the bad with the good.

“Tikki Tikki Tembo” by Arlene Mosel is a humorous story that may or may not be an authentic folk tale, but the book is certainly fun to read—especially out loud.

The book is about the oldest son with a long name, Tikki tikki tembo-no sa rembo-chari bari ruchi-pip peri pembo and his younger brother Chang. Chang means “little” or “nothing.”

According to the book, in ancient China only the first son is honored with a special name. Chang falls into a well and is easily rescued.  Then Tikki falls into the well and almost drowns because his little brother has trouble pronouncing his name when trying to get help.

The book really doesn’t have a moral except to say don’t be pretentious when naming a child.

I hope that the reading of any of the books mentioned in this column will bring  joy and happiness in the year to come. Gung Hay Fat Choy!

Linda Wiegenfeld is a retired teacher. Please send any comments or ideas for her column to lwiegenfeld@aol.com