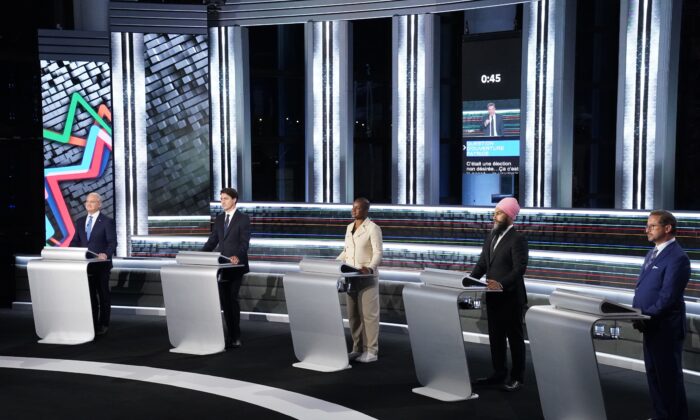 Party leaders criticized book burning by a francophone school board in Ontario during their French-language debate on Sept. 8. The project was done in 30 schools in the name of reconciliation with indigenous peoples.

“It’s completely unacceptable to burn books,” said Liberal Party Leader Justin Trudeau, when asked by debate moderator Patrice Roy if it’s his duty as a leader to denounce the book-burning when the news first broke on Sept. 7.

“At the same time, we’re not going to tell aboriginal people how they should feel. We have to find a balance. That’s very, very important,” he said.

Conservative Party Leader Erin O’Toole said the road to reconciliation doesn’t need to involve “tearing Canada down” in a post on Twitter Sept. 7.

“Burning of books is always unacceptable in a society like our society. We should be focusing on reconciliation without that kind of behaviour,” he said during the leaders’ debate.

Green Party Leader Annamie Paul said she understands the frustrations of indigenous communities, but said that there “are better ways to express them.”

“I hope we will be able to find more productive ways to do this, but we have to find solutions,” she said.

NDP Leader Jagmeet Singh also criticized the actions taken by the school board, saying “I don’t think burning a book is a good idea, not at all.” But he said Canada should engage in a “serious conversation” on how to teach the history of indigenous peoples.

He added what he learned during his childhood “was not respectful to the dignity and the contributions, and the knowledge of Indigenous peoples.”

“I think we should look at history and know what were the things that people did in the past,” he said.

Bloc Québécois Leader Yves-François Blanchet, who also disagreed with the book burning, said Canada has to “confront what is found in our literature and our past.”

“What is said is not representative of who we are, so we need to prepare our children and inculcate some better values,” he said.

People’s Party of Canada Leader Maxime Bernier, who was not invited to the debate due to criteria established by the Leaders’ Debates Commission, condemned the book burning as a move by political leftists.

“The far-left flippy wokes are destroying our freedoms, our culture, our civilization,” he wrote in French on Twitter on Sept. 7.

The book burning, which was carried out by Catholic school board Conseil scolaire catholique Providence in 2019, included a “flame purification” of books for “educational purposes” and using the ashes as fertilizer to plant a tree.

CBC Radio-Canada, which first reported the issue, said over 4,700 children’s books depicting indigenous people were removed from library shelves and destroyed—dumped, burned, or buried—across the 30 French-language schools overseen by the school board in southwestern Ontario.

An excerpt from a video intended for students, reported in Radio Canada’s article, told them that “we bury the ashes of racism, discrimination, and stereotypes in the hope that we will grow up in an inclusive country where all can live in prosperity and security.”

Lyne Cossette, the board’s spokesperson, told Radio Canada that the removal was done as “a gesture of reconciliation” and “a gesture of openness” with the indigenous communities.

A list obtained by Radio-Canada showing some of the books removed included classic titles such as “Tintin in America,” which the school board criticized as a “negative portrayal of indigenous peoples” and “offending Aboriginal representation in the drawings.” Some history books were also destroyed, including two biographies of French explorer Jacques Cartier.