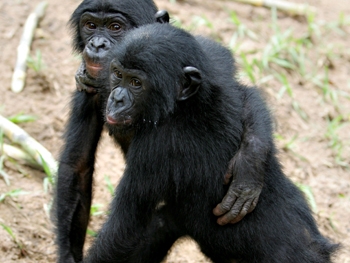 GENEROSITY: Bonobos are found to be willing to share food with others. (Issouf Sanogo/AFP/Getty Images)
Science

Helena Zhu
View profile
Follow
biggersmaller
Print
We have long thought that what makes us human is that we care and share. Yet this trait has now been seen in bonobos, which are a species of chimpanzee, according to new research that will be published in the March 9th issue of Current Biology.

"It has been suggested that only humans voluntarily share their food," said lead author Dr. Brian Hare from Duke University in North Carolina in a press release. "However, the food sharing preferences of the unusually tolerant bonobos have never been studied experimentally."

Hare and his colleagues carried out a study with unrelated pairs of hungry bonobos, in which the animals had to choose whether to eat the food by themselves or share it with another bonobo.

The test subjects, each confined in a room, were given the opportunity to enjoy the food all by themselves or use a "key" to open the door for a bonobo kept in the adjacent room, which they could easily see.

"We found that the test subjects preferred to voluntarily open the recipient's door to allow them to share highly desirable food that they could have easily eaten alone—with no signs of aggression, frustration, or change in the speed or rate of sharing across trials," said Hare.

"This stable sharing pattern was particularly striking since in other, non-sharing contexts, bonobos are averse to food loss and adjust to minimize such losses."

The researchers said that the bonobos in their study probably decided to share in order to receive favors in the future, but additional studies are required to gain further insight into the reason behind sharing.