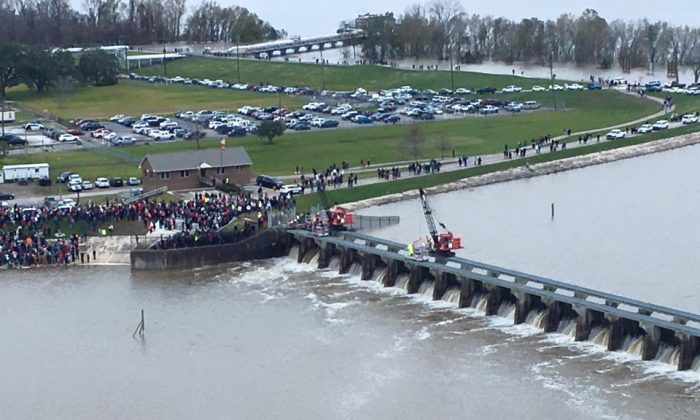 The Bonnet Carre Spillway was opened on Sunday to prevent flooding in New Orleans.

Rising water levels due to heavy rains in the Mississippi Valley prompted the U.S. Army Corps of Engineers to make the decision.

The move is to keep the volume of Mississippi River flow at New Orleans from exceeding 1.25 million cubic feet per second, the Corps said, reported WDSU.

“We’re able to divert it around the city, through Lake Pontchartrain, and then out into the gulf that way. And what it does, it allows us to literally regulate the water in New Orleans,” Corps spokesman told WWL.

“The basis for all our decisions is public safety. We want to do what’s best for the safety of the people that live in this area.”

People who want to see the spillway open should go to the Project Office at 16302 River Road in Norco.

All public access areas within the spillway, including the public boat launches, Lower Guide Levee Road, and the St. Charles Parish Recreation Area near U.S. Highway 61 will be closed beginning on Sunday until further notice.

The Corps is expected to open the Morganza Floodway onTuesday to move the water into the Atchafalaya River basin as part of the flood mitigation measures.

The state is also hoping use millions of dollars from fines levied against BP and its drilling partners resulting from the Deepwater Horizon oil spill to build at least two sediment diversions, one on each side of the river, during the next few years, reported NOLA.com.

In the meantime, it’s been unable to use two existing freshwater diversions at Caernarvon on the east bank and Davis Pond on the West Bank during high-river events because the laws governing their operation are aimed at limiting the flow of freshwater through them to levels that minimize damage to oysters.