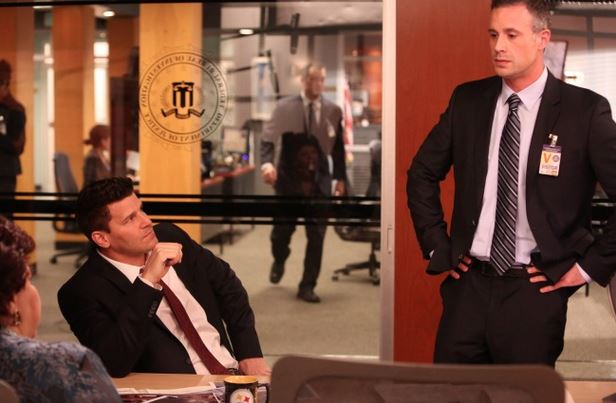 Bones Spoilers: What Happens in Season 9 Episode 16 and 17? (+Trailer)

Bones season 9 returns to Fox on March 10 with episode 16–the season finale is one week later.

Let’s check out what we know about what’s coming up.

Episode 16, “The Source in the Sludge”

This episode will feature Brennan trying to prove herself more while out in the field as her insurance company thinks that Booth is at more risk than she is when they’re together on cases. As the official description says, “Brennan wants to work more closely with Booth in the field, and the duo must confront the implications of what that means to their family.”

In addition, Freddy Prince Jr. will guest star in the episode as CIA agent Danny Beck, who must work with Booth to track down an Afghani terrorist after a CIA informant is found murdered. Brennan gets concerned that no one is questioning his character’s authority.

It’s unclear whether this is for episode 16 or 17, but TVLine reports that Cam’s going to meet Arastoo’s “very traditional, possibly judgmental mother and father, who are very eager to meet their prospective future daughter-in-law.”

Episode 17, “The Repo Man in the Septic Tank”

-A repo man’s remains are found in a septic tank, and the Jeffersonian team must work together to figure out who the killer is. When the team discovers that the victim had a troubled past, some key witnesses from his earlier days become potential suspects.

-Meanwhile, handsome and charming Rodolfo Fuentes (guest star Ignacio Serricchio) has defected from Cuba, where he was a forensic anthropologist, but now needs an internship to complete his degree. Brennan agrees to try him out as an intern on a case.

-Also, Brennan and Booth discuss whether or not Christine should have a religious upbringing.

In the season finale, there will be a tribute card to the late Ralph Waite. A memorial may be included in the next season.