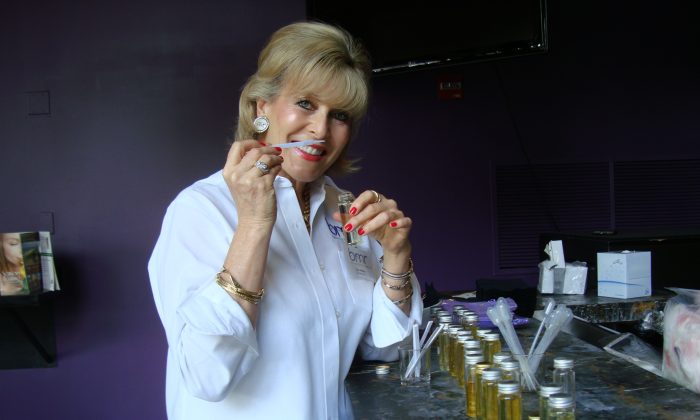 Sue Phillips in the lab at “The Scentarium”
Beauty

Bonding Through Scent on Valentine’s Day

No, we are not about to delve into the mating habits of wolves, as the title might suggest. The way we smell is a powerful signal that announces who we are, or who we want to be.

And whether we admit it or not, when we want to get to know someone intimately, it also means presenting them with the best version of ourselves, and typically, a rather heavily censored one at that. Both women and men do it to the same extent, with slight variations in routine.

This is particularly true for the initial “getting-to-know-you” period, because later on, our rougher edges will inadvertently begin to show, which is a natural phase after all, with its own adventures.

Wearing perfume is a daily enactment of this impulse to show our “better self” in all our social interactions. Many of us try to manipulate our scent to something not as bestowed by nature, but as imbued by perfume.

But there is also the possibility of going one step further to forge our very own alluring scent.

For new couples who quietly despair about finding that Valentine’s gift with a good dash of originality, adventure, and excitement, taking an olfactory trip together could be just the ticket. And, as I have found out, with the added bonus of getting to know your partner, or just yourself, better.

Our “Scent Love Boat” captain is fragrance expert Sue Phillips who has had a love affair with scents from an early age. Phillips developed some iconic fragrances such as”Tiffany,” “Tiffany for Men,” “Society” by Burberry, and “Burberry for Men,” as well as the original three eponymous Trish McEvoy fragrances.

And like all perfumers, she understands the unrelenting power of smell to have a direct effect on our deeper selves. Nowadays, you’ll find Phillips in her underground lair called “The Scentarium” in Tribeca.

As you enter, it feels like a cozy living room that, understandably, is mostly devoid of scent but full of paintings and colored bottles. She invited me to experience the process of finding my “scent personality” with the ultimate aim of creating my very own fragrance.

According to Phillips “you can really judge someone’s personality through fragrance.” And to narrow down the search even more, she worked on the questionnaire with a psychologist—”the responses are really reflective of a person’s individuality,” said Phillips.

The multiple-choice questionnaire was fun and didn’t take longer then five minutes. Without giving away too much, the questions were not in any way intrusive or inappropriate. As with any multiple-choice test, it’s best to go with your first impulse and try not to censor yourself too much.