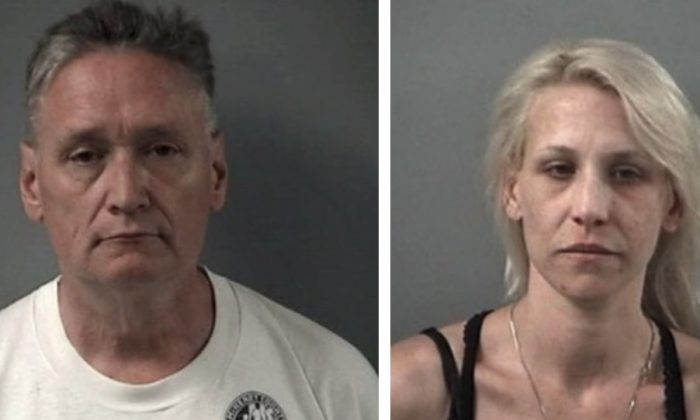 Bond has been set at $5 million for each of the parents of a 5-year-old boy who went missing from Crystal Lake, Ill., and was later found murdered.

Andrew “AJ” Freund, whose body was found in a shallow grave on the morning of April 24 in Woodstock, Ill., had been beaten to death, according to WGN-TV.

Prosecutors also said that prior to being beaten, AJ had been subjected to a forced cold shower for “an extended time.”

Andrew Freund Sr., 60, and Joann Cunningham, 36, appeared in McHenry County Court on April 25, where they faced multiple charges, including aggravated battery and first-degree murder, according to the station.

Cunningham, who is seven months pregnant, shed tears as the judge listed the charges, according to the station.

Freund Sr. showed no emotion in the courtroom.

Arraignment of the two is expected to take place on April 29.

The boy’s body was wrapped in plastic and buried in a shallow grave in a rural area of Woodstock, Crystal Lake, police Chief James Black said at a news conference, according to The Associated Press.  Woodstock is about 50 miles northwest of Chicago and a few miles from the family’s home in Crystal Lake.

Black said investigators were led to the body after they interviewed the boy’s parents overnight and presented them with cellphone evidence.

In a message intended for the slain boy, the chief said, “We know you are at peace playing in heaven’s playground and are happy you no longer have to suffer.”

Luis Maldonado, a local man, described the area where the boy was discovered as fairly isolated.

“It’s very quiet,” he told the Chicago Tribune. “If they found a body here, I don’t know how they found this place.”

A.J. had been reported missing by his parents about a week ago.

Police officials were seen taking items from the family home on April 23, including a shovel.

Other evidence investigators removed included a toddler mattress and a large plastic tub, according to WGN-TV.

Freund Sr., the boy’s father, and Cunningham, the mother, were interviewed by Crystal Lake Police after the child disappeared, according to reports.

His father said he didn’t know what happened to his son, Fox32 reported.

Investigators said earlier this week that Cunningham had been “uncooperative with police” when they interviewed her.

“[Cunningham] is a valuable resource because she was the last to see Andrew,” Crystal Lake Deputy Chief Tom Kotlowski told CBS News, adding that the elder Freund spent three hours with police over the weekend.

On April 23, the police released more than 60 pages of reports written by officers who responded to various calls about the house where AJ lived with his parents, AP reported.

One report described seeing the home littered with dog feces and urine, and a children’s bedroom where “the smell of feces was overwhelming.” Another report said the officer found the house to be “cluttered, dirty and in disrepair,” and without electrical power.

The heavily-redacted reports also indicate state child welfare workers were called after officers spotted a large bruise on one of the young boys living there, but that the children appeared to be “healthy and happy” and were not removed from the house.

Epoch Times reporter Jack Phillips and The Associated Press contributed to this report.