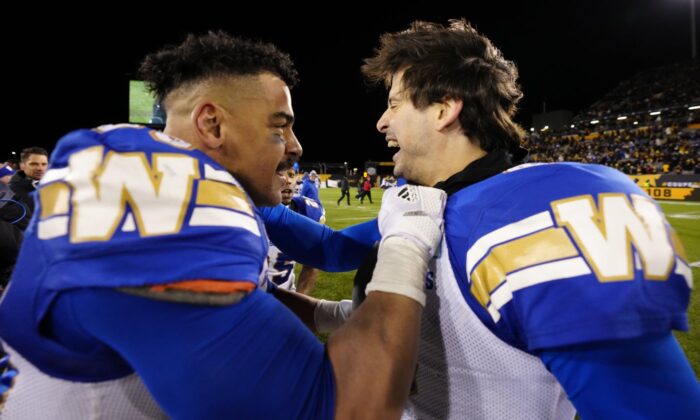 The Manitoba Liberal Party has been told to stop selling merchandise with a “W” logo because it appears similar to that of the Canadian Football League’s Winnipeg Blue Bombers.

A spokesperson says the club recently told the party in writing that it was using its “W” trademark on items such as tuques without permission, and the Blue Bombers do not support one political party over another.

The Liberals are running a former Blue Bomber player whose name starts with W—Willard Reaves—in a byelection slated for March 22.

It’s the second time this year the Liberals have run into controversy over their merchandise.

They pulled down their online store after selling a red dress with a message written across the backside and hips that said “overthrow the government.”

The Liberals said the dress was posted without authorization by an unnamed volunteer.

The Progressive Conservatives are also running former Blue Bomber Obby Khan in the byelection. Trudy Schroeder, a former executive director of the Winnipeg Symphony Orchestra, is running for the New Democrats.

The Green party is putting up Nicolas Geddert. There is also an independent candidate, Patrick Allard, in the running.

The byelection was called to fill the Fort Whyte seat in southwestern Winnipeg, which was held by former premier Brian Pallister before he retired last fall.