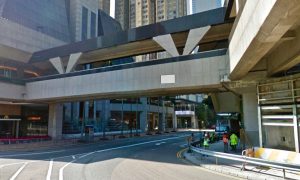 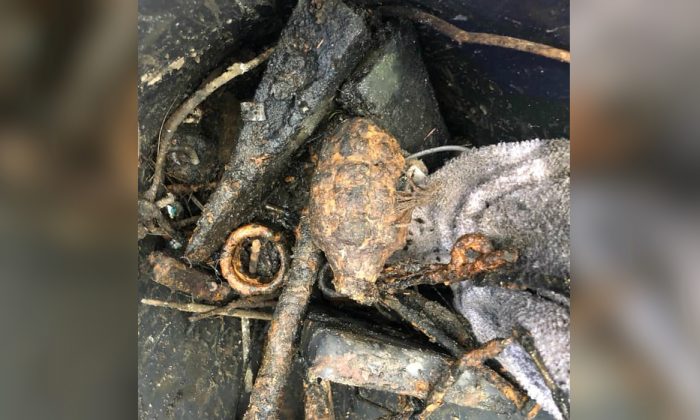 Scrap metal, along with a World War II grenade, snagged by a magnet fisher in Florida on Jan. 26, 2019. (Ocala Police Department)
US News

A restaurant was evacuated and the bomb squad called in when a Florida magnet fisher accidentally snagged what he believed to be a grenade, put it in his girlfriend’s trunk and drove to a nearby Taco Bell.

The Ocala Police department warned the public to steer clear of the Taco Bell on East Silver Springs Boulevard where Saturday evening diners were beginning to gather.

“Be advised that the Taco Bell on East Silver Springs Blvd. has been evacuated, following a report of an explosive device located in a vehicle on premises,” said the statement on Jan. 26.

“At 5:01 p.m. a caller informed dispatchers that he had found a hand grenade while magnet fishing in Ocklawaha, put it in his trunk, and drove to Taco Bell in Ocala.”

A later statement said the rusty object had indeed been verified as an authentic World War II hand grenade.

“The bomb squad removed the grenade without incident and advised it would be disposed of properly,” said the police in an update. “Taco Bell has reopened.”

According to a separate police report, the grenade’s firing pin mechanism “did not appear to be functional,” and it was destroyed as a precautionary measure.

A man and a woman were fishing for “precious metals” with a magnet when they picked up the grenade. The man put it into a plastic 5-gallon bucket along with other assorted salvaged scrap metal, and later placed the bucket inside the trunk of his girlfriend’s vehicle.

According to Gizmodo, the report states, “Both individuals later drove into the Ocala city limits, parked at the Taco Bell on East Silver Springs Boulevard, and notified law enforcement of their discovery so it could be recovered.”

It isn’t the first time that magnet fishers have stumbled across unexploded ordinances.

In the UK, where magnetic fishing has become a growing pastime, army bomb disposal teams are regularly being called out, according to the BBC, when magnet fishers have found artillery at the bottom of canals and river beds.

The Ministry of Defense told the BBC that in some cases live ammunition—including grenades—has been found.

UPDATE: This has been verified as an authentic WWII hand grenade. The bomb squad removed the grenade without incident…

Magnet fishers say that trawling the waterways for metal objects is a fun way to help clean up the environment.

Like so many pastimes these days, keen magnet fishers record their finds in YouTube videos, some of which can be shared over a million times.

Alex Jacobson is a magnet fisher from Florida. He said that magnet fishing is more rewarding than regular fishing. “You’re not just casting a lure out, you’re not hoping to get something. With magnet fishing, there’s a lot better chance of actually catching something because there’s going to be a lot of debris in the water.”

But among the bikes, benches, and jewelry, the popular magnet fisher websites also list items such as knives and bullets, and antique pistols.

With waterways being a popular disposal point for criminal evidence, it isn’t surprising that trawling can sometimes uncover a cache of cash registers, money boxes, safes, and even discarded guns.