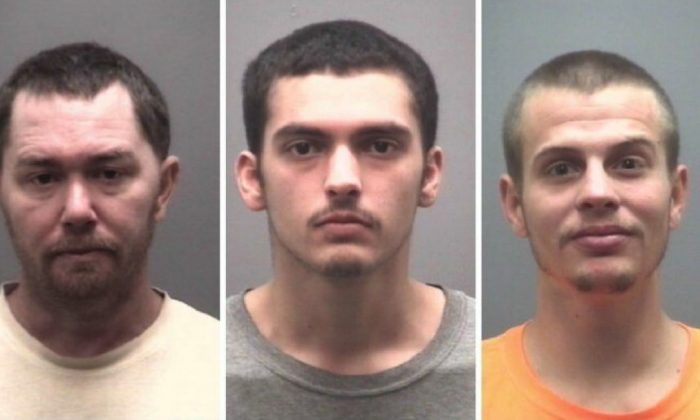 A plot to blast a hole into the Alamance County Detention Center was foiled when the inmate-mastermind accidentally mailed the plans to the wrong address.

The Alamance County Sheriff’s Office said on Dec. 14, according to the Times-News of Burlington, that investigators uncovered the scheme when Sean Damion Castorina, who faces charges of capital murder, sent a letter to an unintended recipient with instructions about detonating a bomb.

Sheriff Terry Johnson said three people were charged and two arrested Dec. 13 on suspicion of planning to facilitate Castorina’s escape by blowing a hole in the jail wall with either a fertilizer-based bomb or dynamite.

Castorina, who came up with the idea, allegedly conspired with Shannon Douglas Gurkin and Dakota Lee Marek in the scheme, Fox8 reported.

He accidentally sent the letter to a woman in Graham, who received it Dec. 6 and was alarmed by what she found inside.

The woman said the letter contained a detailed drawing of the prison and instructions for making a bomb.

The instructions said the bomb should be planted on the south side of the detention center where it would detonate, creating a hole to help Castorina and others escape.

Officials said the letter helped thwart a plot that would likely have injured inmates, government officials, and jail staff, according to Fox8.

Sheriff Johnson said Gurkin, Marek, and Castorina had spent time together in jail.

He added that though their relationship is still under investigation, he believes the three shared common views on anarchy.

“An anarchist is [a person who believes in] a social structure without government or law and order,” Johnson said. “I think these individuals were followers of Castorina.”

The sheriff said Castorina convinced Gurkin and Marek to help make and detonate the bomb.

When Marek and Gurkin were released from jail, they stayed in touch with Castorina, who conveyed instructions on making and planting the explosive.

Johnson said the plan intended for the blast to blow a hole in the south wall of the jail so Castorina could escape.

The plan fell apart when the Graham woman, who was not named in the report, contacted the police.

Johnson said he was “very grateful” for the tip, and that by enlisting the help of the State Bureau of Investigation that “continued to work with us through day and night in finding out who these individuals were,” the bomb plot unraveled.

Castorina now faces additional charges of trying to escape a county jail, manufacturing and assembling a weapon of mass destruction, and felony conspiracy, according to Times-News of Burlington.

Gurkin and Marek were both charged with malicious use of an explosive to damage property.

Castorina was arrested in the kidnapping and murder of Harold Simpson, whose remains were discovered in August 2017.

Castorina attempted to escape from the jail’s annex unit earlier this year.

He is being held in solitary confinement until his trial.