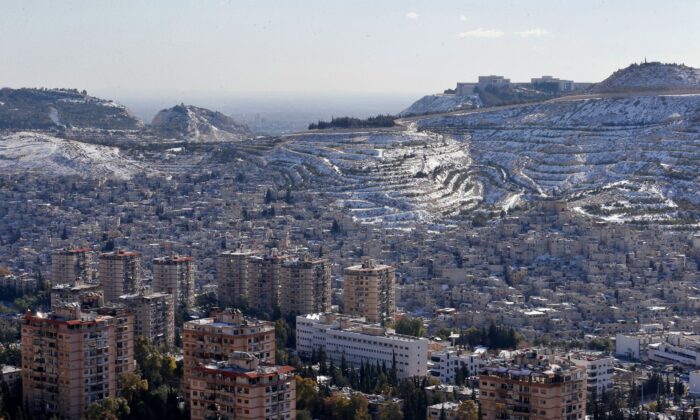 The blast occurred during rush hour at a customs roundabout near the capital’s landmark Omayyad Square, according to the report. It gave no further details. There was no immediate claim of responsibility.

Such attacks have occurred in Damascus in recent months amid an otherwise calm period in the capital. Government forces captured rebel-held eastern neighborhoods of the city in 2018.

Government forces now control much of Syria with the help of President Bashar Assad’s allies Russia and Iran, while rebels are mostly cornered in the country’s northwestern province of Idlib. U.S. and Turkish troops, meanwhile, are deployed in parts of the country’s north and east.

In October, two bombs attached to a bus carrying Syrian troops exploded in Damascus, killing 14. It was one of the deadliest bombings in the capital in years. A little-known group calling itself the Qasioun Brigades claimed responsibility for the attack at the time.

In recent years, attacks in Damascus have been rare. One of the last major explosions to take place was in 2017—when suicide bombers hit a judicial office building and a restaurant, killing nearly 60 people. The attacks were claimed by ISIS terrorist group.

The extremist organization has not held territory in Syria since 2019, but it continues to represent a threat with sleeper cells, mostly hiding in Syria’s expansive desert.

IS fighters have attacked Syrian troops in central and eastern Syria. The extremist group has also carried out attacks on U.S.–backed Kurdish-led fighters in the northeast, including a raid on a prison in late January that led to 10 days of fighting in the city of Hassakeh. The clash left nearly 500 people dead.

Syria’s conflict began in March 2011 and has killed nearly half a million people, displaced half the country’s pre-war population of 23 million, and left large parts of the country destroyed.