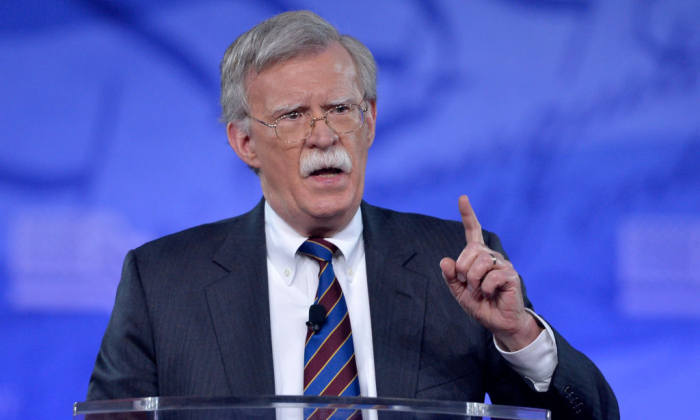 The Justice Department’s indictment of 12 Russian nationals accused of hacking Democratic computer systems during the 2016 election has worked to strengthen President Donald Trump’s hand ahead of the July 16 summit with Russian President Vladimir Putin, according to national security adviser John Bolton.

“The president was briefed on the indictment coming. I spoke with him about it. He was perfectly prepared to have it come before the meeting with Putin. I would say, in fact, it strengthens his hand,” Bolton told ABC News’ “This Week” in a segment aired on July 15.

“It shows that the justice system, the Department of Justice, are aware of these Russian efforts in election meddling, and I think the president can put this on the table and say, ‘This is a serious matter that we need to talk about.”

Special counsel Robert Mueller, who is investigating Russia’s meddling in the 2016 election, charged 12 Russian nationals in an indictment (pdf) filed at the U.S. District Court for the District of Columbia on July 13. Mueller charged the Russians with hacking into the emails of the employees of the Clinton campaign, the Democratic Congressional Campaign Committee (DCCC), and the Democratic National Committee (DNC).

Deputy Attorney General Rod Rosenstein announced the charges in a press conference days before Trump was scheduled to meet Putin. Rosenstein said that he had informed Trump about the charges earlier this week.

The Kremlin has denied that it had anything to do with the hack. Before the indictment, Putin told Bolton that the “Russian state” had nothing to do with the cyberattack, but the Russians charged in Mueller’s indictment are all allegedly part of Russia’s spy agency formerly known as the GRU.

“He made it plain that he said the Russian state was not involved, and he was very clear with his translator that that’s the word that he wanted,” Bolton said. “Now we’ll have to see, given that these are allegations concerning GRU agents—obviously part of the Russian state— what he says about it now.”

Bolton found it “hard to believe” that Putin would not know about the hacking, given that the people charged are part of Russia’s military intelligence.

Asked about the indictment during his visit to the United Kingdom, Trump told reporters that he would “absolutely bring up” the meddling issue at the meeting with Putin.

In an interview with CBS aired on July 15, Trump said that Mueller’s probe is hurting America’s relationship with Russia. The president has criticized the special counsel probe repeatedly and frequently calls it a “hoax” and a “witch hunt.” Mueller was tasked with investigating allegations of collusion between Trump campaign associates and Russia but has not produced any evidence or indictments related to that charge.

“I would say that … I think it hurts our relationship with Russia,” Trump told CBS’s “Face the Nation.”

“I actually think it hurts our relationship with a lot of countries. I think it’s a disgrace what’s going on.”

Trump also criticized the DNC for having poor cybersecurity and leaving its systems exposed to foreign hacking. According to the indictment, the Russian operatives obtained login information using off-the-shelf tools often employed by online scammers. The president noted the Russians’ attempt to hack the Republican National Committee, which he said had better security.

“I think the DNC should be ashamed of themselves for allowing themselves to be hacked,” Trump said. “They had bad defenses, and they were able to be hacked.”

Chairman of the House intelligence committee Devin Nunes (R-Calif.) said that Mueller’s indictment “would look ridiculous” if Trump declassified portions of his committee’s report dealing with Russia’s efforts to steal and release the Democrats’ emails. Nunes told “Fox Sunday Futures” that most of the information in the indictment was already included in a report the intelligence committee released in April.

The details were included in Chapter 2 of the report, but the chapter was heavily redacted following requests from the Justice Department and the FBI. Republicans on the committee voted to release the report despite unanimous opposition from the Democrats.

Top Democrats, including Senate Minority Leader Chuck Schumer and House Majority Leader Nancy Pelosi, are urging Trump to demand that Putin extradite the hackers. Bolton said that would be impossible since the United States has no extradition treaty with Russia.

Bolton noted that American officials could work with Interpol and the International Association of Chiefs and Police to arrest the defendants in other countries. Affecting an arrest with a public indictment is harder since the people charged are on notice, Bolton said adding that he believes making the indictment public was the right choice.