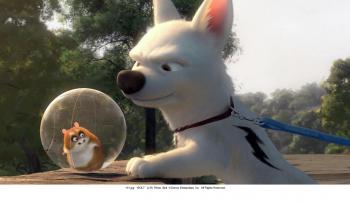 Bolt, a dog who thinks he has supernormal powers, goes on a search for his
Entertainment

Bolt’s a dog with superpowers, or so he thinks. Along with the cat and gerbil he befriends, he sets out on an adventure in 3-D to find his “person,” as he would describe it.

“Bolt” the movie incorporates plots that have previously been on the big screen, such as “The Truman Show” starring Jim Carrey. “The Truman Show” is about a man who grew up in a controlled television studio. His life is scripted, filmed, and broadcast as a television sitcom, and he thinks all the other actors and sets are real.

In this computer animated tale, Bolt (voiced by John Travolta) is much like Truman. The super dog Bolt is made to believe that all of his super powers are real. Bolt protects his person Penny (voiced by Disney Queen Miley Cyrus) who plays along to lead Bolt to believe that he is actually a superhero.

In order to increase viewer ratings, Bolt becomes separated from Penny for a “to be continued” special episode. However, before the second part of the cliff-hanger episode can be film, the super dog somehow ends up inside a box bound for New York City. Upon arrival, an array of events takes place that provide the twists, turns and action to fill a feature film.

Bolt is a wonderful movie for children that will adequately entertain adults. It incorporates fast paced sequences that captivate the often fleeting attention span of children, and offers characters that adults can relate to. For example, one character that travels across the country with Bolt is an abandoned alley cat named Mittens, voiced by Susie Essman. Mittens embodies the essence of what it’s like to live on the streets.

With the majority of children’s films, character development tends to be lagging, but that’s not the case with “Bolt.” The character development in the supporting roles is rather in depth. For example, Rhino has an obsession with Bolt. He sees the television celebrity as the greatest animal actor ever, and continues to describe his experience tagging along with Bolt as the best time of his life. This provides an amusing aside on how our society puts emphasis on celebrity culture.

“Bolt” is the directing debut of 14-year Disney veteran Chris Williams. Having been on the Disney team for some time, Williams brings a presence in tune with his target audience.

In a display of no-brainer casting when trying to draw the kiddies and tweens to the movies, the involvement of teenage sensation Miley Cyrus will likely pay in spades! The teen queen even created an original music track with John Travolta entitled “I Thought I Lost You.”

Overall Bolt has that feel-good atmosphere you would expect from a Disney film, and has family fun written all over.