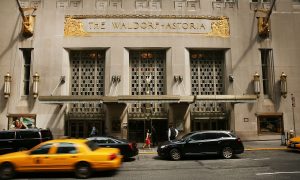 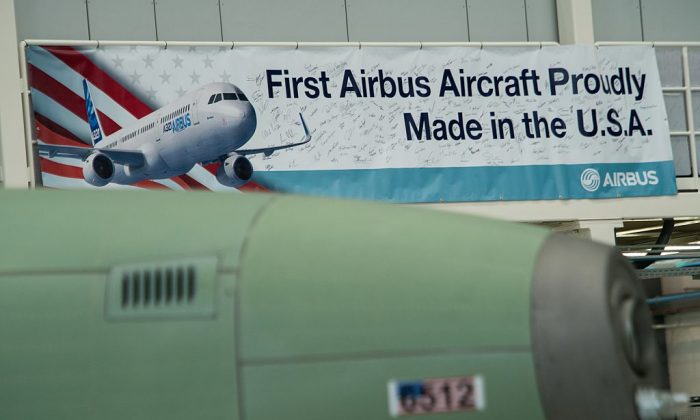 A sign is seen during the inauguration of Airbus' first US manufacturing facility in Mobile, Alabama, on September 14, 2015. (NICHOLAS KAMM/AFP/Getty Images)
Economies

WASHINGTON—The United States has received the lion’s share of foreign investments worldwide, and the nation’s continued economic growth, coupled with tax reform, has further strengthened its appeal for international investors.

Last year, the United States remained the largest recipient of foreign direct investment (FDI), attracting an estimated $226 billion in inflows, according to the U.N. Conference on Trade and Development (UNCTAD). The investment was almost 60 percent higher than that of China, the next closest rival to the United States.

The U.S. government is gearing up to attract more foreign investors at this year’s SelectUSA Investment Summit held June 10 to 12 in Washington.

The summit, hosted by Secretary of Commerce Wilbur Ross, is the premier federal event to showcase business investment opportunities available throughout the United States. It brings together companies from all over the world with economic developers and service providers from across the United States.

In the past five years, the summit has attracted almost $104 billion in greenfield investment projects in the country, which directly support more than 167,000 U.S. jobs.

More than 3,000 people from more than 70 international markets and 49 U.S. states and territories are expected to attend this year’s summit.

“One of those companies, Indian steel manufacturer JSW, announced its plans to build a $500 million facility in Mingo Junction, a town of just 3,300 people in eastern Ohio. That investment alone has the potential to transform the town’s economy and job market.”

Best Place to Do Business

“The United States marks its longest-ever run at the top of the index this year, likely reflecting its large domestic market, continued economic expansion, competitive tax rates, and technological and innovation capabilities,” the consulting firm stated in a report.

Aside from the United States, this year’s top five foreign investment destinations include Germany, Canada, the UK, and France. China fell to seventh this year—its lowest ranking in the 20-year history of the index, after holding the top position from 2002 through 2012.

The index is constructed using data from a survey of 500 senior executives of leading corporations headquartered in 30 countries.

Sustained and robust economic growth in recent years has boosted U.S. competitiveness in attracting FDI. The U.S. economy grew by 2.9 percent last year, compared with an average of 2.2 percent across developed countries, according to A.T. Kearney.

In addition, business-friendly policies in recent years, including the Tax Cuts and Jobs Act of 2017 and regulatory rollbacks by the Trump administration, have contributed to the country’s sustained appeal to foreign investors.

However, reforms to the Committee on Foreign Investment in the United States (CFIUS) and the trade conflict with China have created complications for FDI inflow to the United States, particularly from China.

The new CFIUS legislation, which was signed into law in 2018, granted more power to the regulators to monitor and block foreign investments in the United States.

Foreign investments to the United States fell 18 percent in 2018 from the previous year, according to UNCTAD. This was less than the broad-based decline in developed markets, where FDI flows fell 40 percent last year.