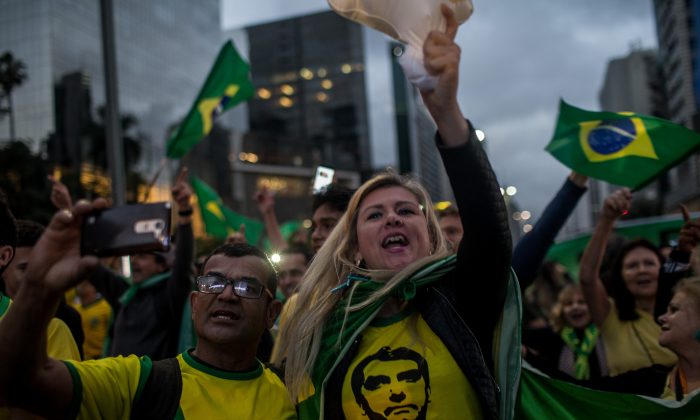 Bolsonaro Pledges to ‘Change the Destiny of Brazil’ After Winning Presidency

Brazil’s president-elect Jair Bolsonaro has pledged to clean up politics, crack down on crime, and set a new direction for his country.

“We cannot continue flirting with socialism, communism, populism, and leftist extremism. … We are going to change the destiny of Brazil,” Bolsonaro said in his acceptance address, adding that he will work to root out graft and stem a tide of violent crime. The conservative lawmaker said that he’ll govern according to the Bible and the country’s constitution.

An outspoken admirer of U.S. President Donald Trump, Bolsonaro also pledged to realign Brazil with more advanced economies rather than regional allies, overhauling diplomatic priorities after nearly a decade and a half of leftist rule.

Trump called Bolsonaro on Oct. 28 to congratulate him on his election victory and both men expressed a strong commitment to work together, the White House said.

Bolsonaro won 55.2 percent of the vote in the run-off election, compared with 44.8 percent for left-wing hopeful Fernando Haddad of the Workers Party (PT), according to electoral authority TSE.

The rise of the 63-year-old congressman and former army captain was propelled by the rejection of the leftist PT that ran Brazil for 13 of the past 15 years. The party was ousted from power in 2016 in the midst of a deep recession and political graft scandal.

Thousands of Bolsonaro supporters cheered and set off fireworks outside his home in Rio de Janeiro’s luxurious beachfront Barra de Tijuca neighborhood as his victory was announced. In Brazil’s commercial capital of Sao Paulo, Bolsonaro’s win was greeted with fireworks and the honking of car horns.

Investors have also cheered Bolsonaro’s ascent, relieved that he could keep the PT out of power and hopeful that he would carry out fiscal reforms proposed by his orthodox economic guru.

Bolsonaro said he will “unite Brazil” by cutting bureaucracy and red tape for businesses. He said he’s committed to fiscal discipline and called for the early elimination of the federal government’s budget deficit.

“We are going to think in terms of more Brazil and less Brasilia,” he said, referring to the nation’s capital, where he will take office on Jan. 1.

While on the campaign trail in late August, Bolsonaro said in an interview with The Epoch Times that his highest priority is improving Brazil’s economy. He added that he was inspired by Trump’s policies to reduce “the tax burden” and stimulate the economy.

“When Trump took over as the president of the United States, he started to fulfill his promises, leaving the Trans-Pacific Partnership and the Paris Agreement on Climate Change, which is an attitude I also would like to take,” Bolsonaro said, although more recently he indicated that he no longer plans to leave the Paris climate accord.

What he admires the most about Trump’s administration, Bolsonaro said, is “union, patriotism, and Trump speaking about God and family—values that aren’t being followed in Brazil.”

Bolsonaro also spoke out against some of the countries Brazil currently has strong ties with, particularly China, a major trading partner of Brazil.

“China is not buying from Brazil, China is buying Brazil—harbors, electricity transmission lines, mines,” Bolsonaro said. “They are trying to buy fertile lands, and if we open our market to that, we will give up on our food safety.”

Vinícius Fontana in Brasilia and Reuters contributed to this report.