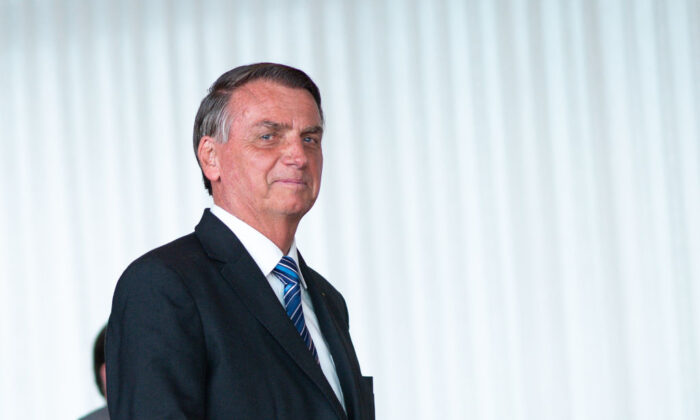 President of Brazil Jair Bolsonaro arrives for a press conference two days after being defeated by Lula da Silva in the presidential runoff at Alvorada Palace in Brasilia, Brazil, on Nov. 1, 2022. (Andressa Anholete/Getty Images)
By Caden Pearson

Marcelo de Bessa, the lawyer who filed the paperwork on behalf of Bolsonaro, told reporters that annulling such votes would leave Bolsonaro with 51 percent of the remaining valid votes and deliver him a victory, the Associated Press reported.

Although the TSE declared Lula da Silva as the winner of the Oct. 30 election, the complaint contends that the deadline for extraordinary verification will end on Jan. 5, 2023, giving the electoral authorities time to investigate Bolsonaro’s claims.

In response to the filing, Minister Alexandre De Moraes, president of TSE, said in a dispatch that the disputed equipment was used in both elections, but Bolsonaro’s complaint only referred to the runoff election on Oct. 30.

The first election, held on Oct. 2, saw Bolsonaro’s Liberal Party pick up more seats in both congressional houses than any other.

“Thus, under penalty of dismissal of the complaint, the plaintiff must add to the complaint so that the request covers both rounds of elections, within 24 (twenty-four) hours” Moraes said (pdf).

After the runoff election results, Bolsonaro’s supporters in many cities rejected the outcome, taking to the streets in massive numbers and resoundingly calling for an official audit of the election results.