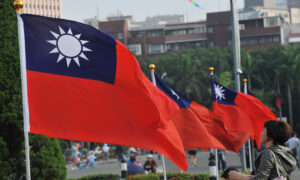 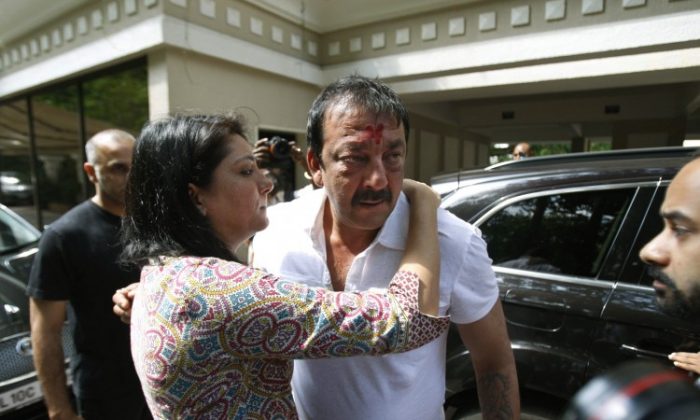 Sister Priya Dutt, tries to console Indian Bollywood actor Sanjay Dutt, center, after he broke down during a press conference at his residence in Mumbai, India, Thursday, March 28, 2013. Dutt says he has not sought pardon for a 1993 weapons conviction and will serve his prison sentence as ordered by India's Supreme Court. (AP Photo/Rafiq Maqbool)
Asia & Pacific

Bollywood star prison sentence: Sanjay Dutt, a star of numerous Bollywood films, will serve a prison term for a weapons conviction in 1993.

MUMBAI, India—Breaking down repeatedly, popular Bollywood actor Sanjay Dutt said Thursday he will serve his prison sentence for a 1993 weapons conviction in a case linked to the deadliest terror attack in Indian history.

Dutt broke his silence a week after the Supreme Court sentenced him to five years in prison for illegal possession of weapons supplied by Muslim mafia bosses in Mumbai who were linked to the 1993 terror attack that killed 257 people.

“I respect the Supreme Court’s verdict. I have not applied for any pardon,” an emotional Dutt told reporters at a news conference held outside his home in Mumbai, India’s entertainment capital and home to Bollywood, India’s prolific Hindi film industry.

“There are many other people who deserve pardon,” he said.

Dutt broke down repeatedly while reading out a statement and hugged his sister, Priya Dutt, who is a Congress party lawmaker from Mumbai.

Dutt said he and his family were devastated by the verdict.

“Right now I am a shattered man. My family is shattered,” he said.

Dutt, 53, had appealed an original conviction on the charge of possessing an automatic rifle and a pistol that were supplied to him by men subsequently convicted in a series of bombings that hit Mumbai. A separate charge of conspiring to commit a terrorist act was never proven and he was only convicted of the weapons charge.

The actor has maintained that he knew nothing about the bombing plot and that he asked for the guns to protect his family after receiving threats during sectarian riots in Mumbai. His mother was Muslim and his father Hindu.

The trial stemming from the Mumbai bombings lasted more than 18 years, during which Dutt’s acting career soared. He played the lead in several blockbuster films, earning a huge following. He gained enormous popularity for a series of Hindi films in which he played the role of a reformed thug who follows the teachings of nonviolence advocate and Indian independence hero Mohandas Gandhi.

Dutt served 18 months in jail before he was released on bail in 2007 pending the appeal, so three and a half years remain.

The aging actor, who now mainly plays character roles, said he hopes to complete as many of his pending film projects in the four weeks that the court has allowed him before he reports to prison.

“I’ve got a few days left. I have a lot of work. I have to finish all that work. And I want to spend some time with my family,” Dutt said.

Trade analysts say Dutt’s jail term will be a huge financial blow for the industry.

Two of Dutt’s films are being readied for release, but several other projects are midway and are likely to be delayed.

Legal experts said although Dutt had not sought pardon, any other concerned citizen could apply on his behalf.

Markandeya Katju, a retired Supreme Court judge, said he planned to write separately to the Indian president and to the governor of Maharashtra state, of which Mumbai is the capital, seeking a pardon on Dutt’s behalf.