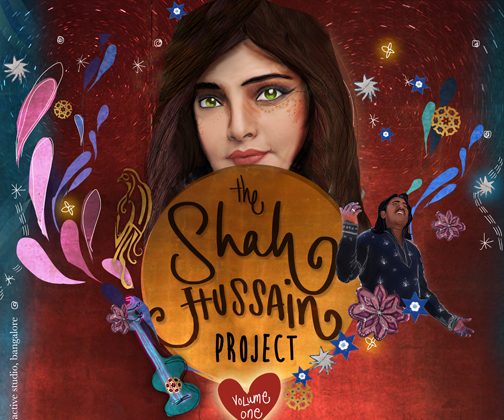 The Shah Hussain Project is a music project inspired by the poetry of a Sufi poet, Shah Hussain. Famous Bollywood singer, musician and actor, Vasundhara Das and Sufi singer Mukhtiyar Ali, have together created the melodious fusion. The first part of the project was released as a CD on 5 May, 2013 in Bangalore, India. (SHILO SHIV SULEMAN)
Entertainment

Two of the finest talents of Indian music industry have come together to produce a project that derives it inspiration from the poetry of Shah Hussain, a South Asian Sufi poet from the 16th century.

Vasundhara Das and Mukhtiyar Ali come from two very different backgrounds and genres of music, together creating a melodious fusion of contemporary and age-old traditions of Indian music. Das, an acclaimed playback singer and an actor in Indian Film Industry (Bollywood), is also trained in classical Indian music; while Mukhtiyar Ali, besides singing Rajasthani folk music, has kept alive the singing traditions of Sufi Qalam (phrases) of semi-nomadic “Mirasi” community of Rajasthan.

Together they lend their vocals to a project that involves scores of musicians and technicians from around India and would soon start to perform live around the world.

“As a musician I have been aware of the fact that music can reach out and touch people’s lives like nothing else can. And testament to that is the renaissance of Kabir and his legacy that has been going on for a while now,” said Das. Kabir was an Indian saint and poet from 14th century and his poetry has formed backdrop to various mainstream Indian films and music.

“The first compositions that were created in my studio were based on the poetry of Kabir. And as I simultaneously read the other poets, the work of Shah Hussain began to appeal more. The poetic finesse, the beautiful metaphors, and the rhythmic structure appealed to the musician in me,” explained Das.

It was at this time that Das and Ali, who had heard about each other, started to interact over creating superior music. “I had gone for an event in Bangalore and met Vasundhara Das there. I visited her studio and we talked, and started from there. We have worked for one and a half years on it,” said Ali.

Ali generally performs with only few Indian traditional instruments said that the project brought him “in touch with experienced artists and multiple instruments.”

Das has worked with Academy and Grammy award winner A. R. Rahman and other noted composers in Indian film industry and abroad. She believes that in the world of music, a lot of collaborative work has created incredibly magical moments around the globe.

“In India, there have been a lot of collaborative projects which have been ongoing for years with or without public recognition. It is now gaining popularity because of mainstream music television trying to dig deeper and promote some of this music on their terms,” she said.

Das and Ali believe that the poems of Shah Hussain called Kafis, originally written in Punjabi, Saraiki and Sindhi languages are a glimpse into the social setting of the poet’s time but the thoughts and ideas are relevant and applicable in today’s social fabric. “The music has lots for today’s youth; how things (value systems) are degrading today, these kalams written centuries ago can teach us how to live today,” said Ali.

The Shah Hussain Project is been widely seen as a meeting of traditional and contemporary styles, based on the poetry and focused on live performance. “Although each song is stylistically different, there is a common thread running through the project in terms of sound. The Shah Hussain Project has brought together musicians and technicians from Bangalore, Rajasthan, Pune, Assam, and Mumbai,” said the project website.

The  crew is now looking forward to perform live around the world after the launch of the CDs at a concert in Bangalore’s Choudaiah Memorial Hall on May 5 this year.