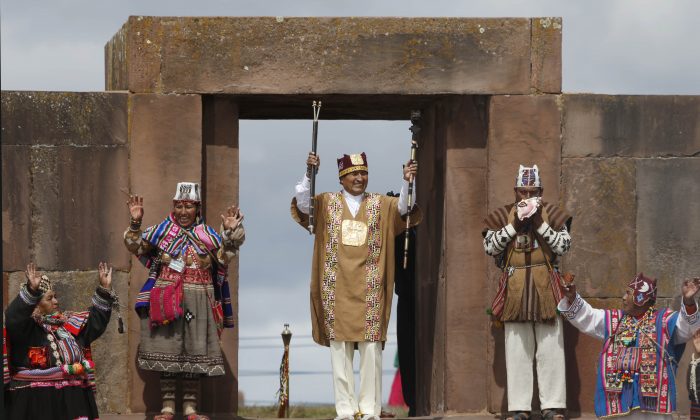 Bolivia's President Evo Morales holds his sacred staffs of power in a ceremonial swearing-in, led by Aymaran spiritual guides, at the archeological site Tiwanaku, Bolivia, Wednesday, Jan. 21, 2015. Morales is set to begin a new term Thursday, that will make him the Andean nation's longest-serving leader, riding high on a wave of unprecedented growth and stability. (AP Photo/Juan Karita)
Americas

LA PAZ, Bolivia—Bolivian President Evo Morales is beginning a new term that will make him the Andean nation’s longest-serving leader, riding high on a wave of unprecedented growth and stability.

But after he takes the oath before foreign dignitaries Thursday, Morales and his compatriots will face economic challenges that could quickly erode those gains and test the 55-year-old leader’s popularity.

Morales’ fortunes will depend on how he copes with an imminent plunge in natural gas prices, the main source of Bolivia’s export revenue. Owing in part to his exacting of a bigger share of natural gas profits, Bolivia’s gross domestic product tripled, reaching $30.6 billion in 2014. With oil prices testing multi-year lows, gas revenues are expected to shrivel.

“Morales has had the greatest political and economic power of any president in (Bolivian) history thanks to what has been the country’s biggest bonanza,” said Marcelo Silva, a political scientist at San Andres University in La Paz, speaking of the commodities windfall and Morales’ ascendance as Bolivia’s first indigenous leader.

Supporters credit Morales with bringing Bolivia into the 21st century through public projects such as the launching of its first satellite and the opening of an Austrian-built aerial tramway system in the hilly capital. In October elections, more than 60 percent of voters backed him.

But some now complain that the president, who grew up herding llamas and living in a dirt-floor adobe house, has grown too fond of the trappings of power.

Shortly after his election victory, Morales broke ground on a $31 million, 20-story government palace that will feature a heliport crowning a stone-facade tower inspired by the giant monoliths of the ancient Tiwanaku culture. Morales has called the old palace an inadequate “mousehole.”

But the timing of the project — just as the country hits strong economic headwinds — has many grumbling.

“What is needed are more schools,” said Walter Laredo, who manages an internet cafe where the new building is going up. “I hope the government of Evo Morales makes better decisions.”

Despite Bolivia’s gains, many of its 10 million people struggle to meet basic needs, with the annual per-capita income below $3,000. Bolivia has long been South America’s poorest country and the world’s third ranking cocaine producer.

An economic crisis could shake Morales’ popularity. Cuts in public spending would make it difficult for him to uphold promises to improve health care and overhaul Bolivia’s notoriously corrupt judiciary. More than 1,000 judges and 300 prosecutors are under investigation or on trial for corruption.

A plunge in global oil prices is expected to slash Bolivia’s gas earnings this year by at least $1.3 billion, which is a fifth of its 2014 total. The country is expected to begin feeling the pinch in the second half of 2015, and likely see it worsen next year.

Mineral prices already have dipped, falling by about 26 percent last year. Among thos impacted are Bolivia’s 100,000 small-scale miners, who are demanding a $100 million bailout, hoping to invest in technology that could boost yields.

If the economy worsens, Morales has said he’ll dip into the country’s foreign reserves, which ended last year at $14.4 billion.

“I’m concerned but not afraid,” he said recently.

Another wild card is regional politics.

“The only thing for the Bolivian government to do is get off the train of 21st century socialism,” said Jaime Aparicio, former foreign minister and ambassador to Washington. “It will have to move closer to the United States and work to navigate this crisis rationally and soberly.”

Although Morales hasn’t tempered his revolutionary rhetoric, he is acting less radical. And he kept nationalizations to a minimum compared to the late Venezuelan President Hugo Chavez, restricting them almost exclusively to public utilities.

And after championing Bolivia’s 36 indigenous groups and enshrining their rights in the 2009 constitution, and on Wednesday he dressed up like an Inca emperor for a ritual Andean inauguration ceremony at the Tiwanaku ruins near Lake Titicaca.

Yet Morales has alienated lowlands natives by promoting a highway through a nature reserve.

And while he has defended the costly new government palace, some wonder whether he intends to take up permanently in the so-called “House of the People.”

Morales was allowed to seek election a third time only because the Constitutional Court ruled that the two-term rule set by the 2009 constitution didn’t apply to his first win.

Some speculate that he will seek to amend the constitution to allow unlimited re-election.

Morales has deftly sidestepped the issue, saying he intends to “respect the constitution.”