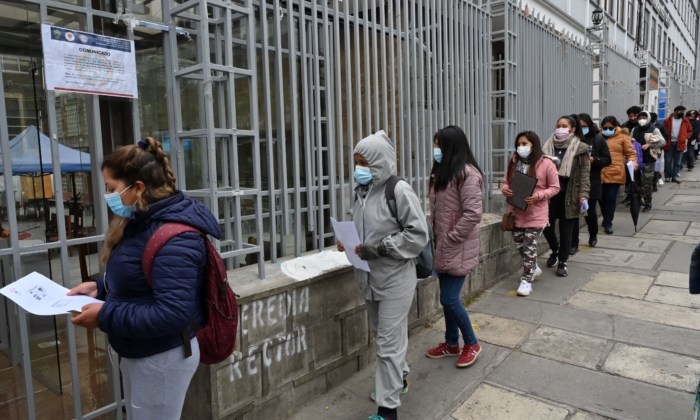 People queue outside a vaccination centre to get the Johnson&Johnson vaccine against COVID-19 in La Paz, on August 2, 2021. (AIZAR RALDES/AFP via Getty Images)
Americas

As the COVID-19 vaccine distribution continues to face challenges in Latin America, Bolivians are speaking out about their frustrations with government healthcare resources and the organizational integrity exhibited by the Movement for Socialism party led by President Luis Arce.

Since the party’s return to power under Arce’s leadership in October 2020, Bolivians have faced a pandemic response fraught with difficulties, including oxygen and medical supply shortages in hospitals.

“There have been many issues,” Isabel Carrasco, 28, former primary school teacher living in Sucre, told The Epoch Times. “My parents couldn’t get their second vaccine until the end of August. Their first dose was in May.”

Carrasco said her 88-year-old grandfather, who received his first dose of Sputnik V, the Russian COVID-19 vaccine, back in April, spent months being turned away from government-regulated healthcare providers who had no information on when he may receive the second dose.

“He would listen to the radio every day to see if there were any announcements of vaccines arriving,” Carrasco said.

Carrasco received her first dose of Sputnik V in August. She said her second dose wouldn’t be possible until November.

Despite the donation of thousands of doses of AstraZeneca and Pfizer-BioNTech vaccines from the COVID-19 Vaccines Global Access (COVAX) facility, the majority of COVID-19 vaccines available to Bolivians are the Russian Sputnik V and the Chinese Sinopharm, both of which have a lower efficacy rating than Pfizer-BioNTech.

According to the World Health Organization, Bolivia suffered a dramatic spike in new COVID-19 cases that began in late March, growing from 4,903 weekly cases on March 22 to a peak of 19,834 weekly cases on June 7. The CCP (Chinese Communist Party) virus claimed the lives of 18,595 people in Bolivia as of Sept. 15.

The CCP virus, commonly known as the novel coronavirus, is the pathogen that causes COVID-19.

Vaccination rates in Bolivia are lower than in neighboring countries with comparable population sizes. In Chile, more than 28.5 million total doses of COVID-19 vaccines have been administered, while the Bolivian government has distributed less than a quarter of that amount, according to World Health Organization data.

Carrasco described how delayed access to the vaccine proved critical as a wave of COVID-19 swept through her hometown in June, infecting her and other family members, all of whom endured severe symptoms.

“I think they could have done a lot to improve [vaccine distribution]. They could have had better vaccines overall, why did we have the Chinese and Russian vaccines, anyway?” Carrasco said, adding that she believes it “has a lot to do with politics.”

Paola Perez, 29, a teacher in Bolivia, told The Epoch Times about the level of public distrust with the Sinopharm vaccine.

“People didn’t want to get Sinopharm because it was Chinese,” Perez said, adding that she and her mother have also experienced delayed access to their second doses of Sputnik V.

Perez’s brother, who is also a teacher working in a rural part of Chuquisaca state, told her he returned to in-person classes as of Aug. 30. According to a statement released from the Sucre Municipal Government, in-person classes have been approved to recommence in rural communities as of July 29. However, the secretary-general of Chuquisaca, Maguiver Rosales, told The Epoch Times parents of students and teachers will be required to show proof of their COVID-19 vaccine status before face-to-face classes will be allowed to resume in the cities.

Perez described the vaccine program and subsequent mandate that affects urban educators as, “too politicized.”

Gabriella Salinas, a 23-year-old student at the Catholic University in Santa Cruz, told The Epoch Times she had difficulties getting vaccinated in August. Her school served as a distribution point for vaccines. The school had announced that Johnson&Johnson vaccines had arrived from the United States. After arriving early she and her mother were told the doses never arrived.

“It was ridiculous!” Salinas said. “I was mad. My mom and I waited a long time with a lot of other people. I asked the nurse what happened and she said the Johnson vaccines were still being held in La Paz. Why? What were they doing with them? They were just sitting on them.”

Brayan Gonzales, a 35-year-old mine worker in Potosi, told The Epoch Times he had trouble finding COVID-19 vaccines during the winter case spike.

“It was a treasure hunt. When our cases went up in June, everyone was trying to get the vaccine. I only get paid when I work, so spending hours waiting in lines just to find out if a place has vaccines costs my family money,” Gonzales said.

Gonzales was fifth in line when Sagrada Familia [health center] opened. When it was his turn, the nurse said the location only had second doses in stock.

“Why wouldn’t they just put a sign on the door? Miners are poor and need to work to survive. My family suffered because you’re too lazy to hang a sign on your door.”