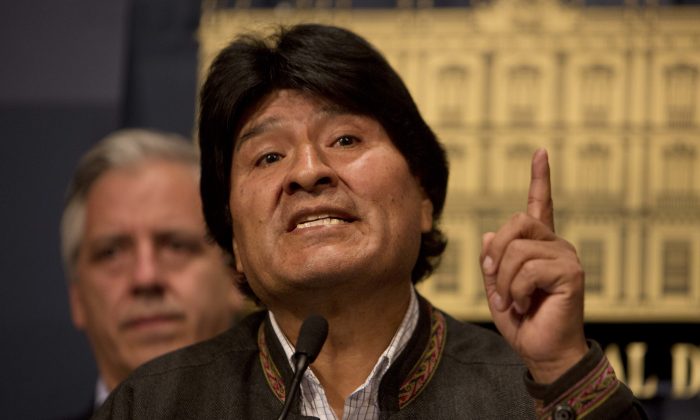 LA PAZ, Bolivia—President Evo Morales and his political opponents traded recriminations Friday over the shocking beating death of a high-ranking government official by protesting miners who had blockaded a highway.

The killing of Deputy Interior Minister Rodolfo Illanes underscored how Morales, a former coca growers’ union leader, has increasingly found himself at odds with the same kind of popular social movements that fueled his rise to power and have made up his political base.

“This is a political conspiracy, not a social demand,” Morales said at a news conference, accusing his political opponents of backing the miners’ cause. He called for three days of official mourning, criticized the “cowardly attitude” of the protesters and insisted that his government had “always been open” to negotiation.

He ordered prosecutors to find and bring to justice those responsible for Illanes’ killing as well as anyone who may have ordered it.

Businessman and opposition leader Samuel Doria Medina rejected Morales’ comments about the opposition and said the government should try to make peace.

“The prices of minerals have gone down and the costs of production have increased,” he said. “That is the cause of the protest.”

“Morales would do well to be critical of himself and set aside false conspiracy theories blaming the right wing and the media,” former President Jorge Quiroga said, “when the undercurrent of these protests is the crisis.”

Mourners brought flowers to a funeral Mass for Illanes on Friday in the capital, La Paz, where a red-uniformed honor guard carried his coffin into the government palace. Lawmakers and government officials paid their respects.

Illanes’ kidnapping and killing followed weeks of tension over dwindling paychecks in a region of Bolivia that has been hit hard by falling metal prices.

The miners began blocking the highway in the town of Panduro, 80 miles (130 kilometers) south of La Paz, on Monday, to demand they be allowed to work for private companies, which promise to put more cash in their pockets.

The issue has bedeviled Morales, who began as a champion of the working class and nationalized oil and gas interests, only to see his support crater amid the financial downturn. Miners say Morales has become a shill of the rich and done little to help them make ends meet as the economy slows.

Illanes, who was also a lawyer and university professor, had traveled to the scene of the protests in an effort to negotiate with the strikers, who had armed themselves with dynamite and seized several highways, stranding thousands of vehicles and passengers.

Instead he was taken captive by the miners Thursday morning. At midday he said via Twitter: “My health is fine, my family can be calm.”

But later in the day Illanes’ body was found abandoned on the side of the highway, his car burned. An autopsy found he died from trauma to the brain and thorax. Police raided the offices of the miners’ union and detained 15 people.

The fatal beating came after the killings of two protesters in clashes with police Wednesday, deaths that likely fueled the tensions.

The highway was clear on Friday as the miners returned to their camps and their leaders stayed out of sight.

It’s rough work in the barren, high-altitude “altiplano” region of the Andes, where the miners live in camps and work with picks and dynamites in nearly tapped-out mines.

They want to be able to associate with private companies but are currently prohibited from doing so. The government argues that if they associate with multinational companies they will no longer be cooperatives.

The influential National Federation of Mining Cooperatives of Bolivia, a strong ally of Morales in years when metals were more valuable, was organized in the 1980s amid growing unemployment in the sector that followed the closure of state mines.

Federation members went on an indefinite protest after negotiations over mining legislation failed. Strikers are also demanding access to new mineral deposits and subsidized electricity to help them handle the crisis in the mining sector.

Morales says they have “exaggerated ambitions.”

Bolivia has seen increased social agitation as a financial slowdown hit an economy heavily dependent on natural gas and minerals, which account for over 70 percent of foreign export sales. Export earnings fell by about a third in the first half of the year. Though down from recent years, Bolivia is still expected to see GDP growth of about 3.9 percent in 2016, outperforming its South American neighbors.