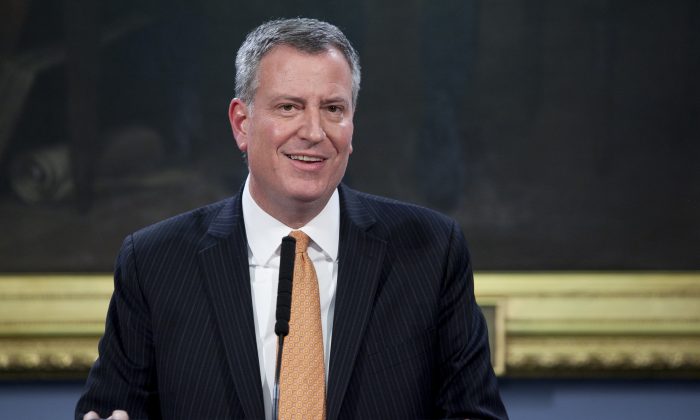 NEW YORK—Mayor Bill de Blasio proposed a major reform of New York City’s corporate tax structure Monday. If enacted, it would be the biggest tax shift since the 1940s.

The reforms would ease the burden on small business owners and manufacturers, while raising taxes on a small number of large companies through broadening the city’s overall tax base. Overall the plan is revenue neutral, meaning that the city budget will be little affected, according to a statement from the mayor’s office.

The plan has bipartisan support, according to officials, and comes after years of complaints from small business owners upset with the current tax systems.

Some small businesses could see a benefit of about $2,000 a year.

Small non-manufacturing businesses with less than $1 million in net income would see their tax rates reduced from 8.85 percent to 6.5 percent. Annually, that would add up to an average benefit of nearly $800, according to the press release.

Small manufacturers with less than $10 million in net income would reap an average annual benefit of nearly $5,300, as their tax rate would fall from 8.85 percent to 4.425 percent. Larger manufacturers, with incomes between $10 million and $20 million, would get a smaller rate reduction.

James Parrott, deputy director and chief economist at the Fiscal Policy Institute, said in a statement that the tax reforms would level the playing field among businesses, making sure large businesses paid a fair share.

The tax cuts and other changes that total up to $300 million would be balanced out with several reforms.

Under de Blasio’s proposal, companies outside of New York City with at least $1 million in receipts from city sales would see an increase in taxes.

As an incentive to stay in New York, businesses in the city would conversely no longer be penalized for expanding and hiring more employees.

Under the reforms, companies that have not been appropriately paying taxes will have to pay more due to improved compliance. Loss-making companies would have to pay up to $10 million on their capital assets, up from the original tax cap of $1 million.

The reform does not touch property or personal income taxes—two kinds of taxes that remain baffling to many. For instance, apartment owners pay more tax than single family home-owners.

“This should not be the end of tax reform in the city,” said Nicole Gelinas, a fellow at the Manhattan Institute, a conservative think tank.

She questioned whether the mayor would be bold enough to reform other taxes. At the same time, de Blasio also had a large budget last year and therefore couldn’t cut taxes too drastically.

“If you really fix the property tax system, there will be some losers—is the mayor willing to stand up to them?”

The plan still needs to be reviewed by state lawmakers and the governor and would be in effect from Jan. 1 if approved.