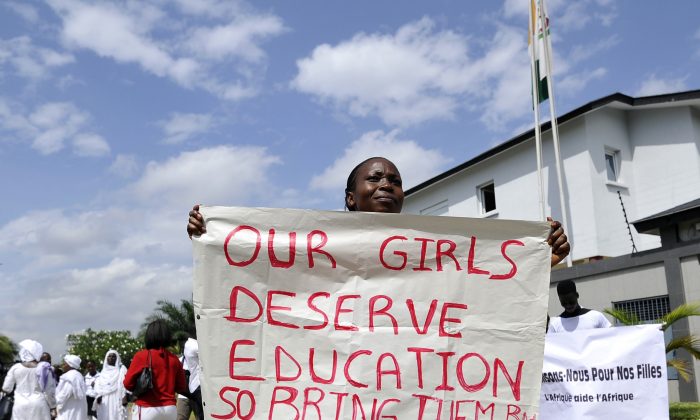 A woman holds a sign to call for the release of more than 200 schoolgirls kidnapped by Boko Haram militants on May 19, 2014 during a sit-in orchestrated by human rights organizations in Abidjan. (Sia Kambou/AFP/Getty Images)
Africa

As murderous as the Islamist terrorist group Boko Haram may be, with its almost daily attacks on civilians, and with the kidnapping of nearly 300 schoolgirls from the northeastern town of Chibok on April 14, it is still just the symptom of bigger social and political problems in the biggest and richest African country.

“The problem with Boko Haram shows a state deeply corrupt, that is apparently more hollowed out and weaker than before, a state that is predominantly focused on the resource-rich south and neglects historically the north,” said Vanda Felbab-Brown, an expert on international conflict and counterinsurgency, and senior fellow at the Brookings Institution.

“There is a great division between the north and the south of Nigeria, and people in the north are deeply unhappy with the president, Goodluck Jonathan.”

Poverty, bad governance, corruption, marginalization of the north, breakdown of the previous system whereby power alternated between the Muslim north and the Christian south, have increasingly stricken Nigeria since Jonathan took power in 2010.

And although all these factors have been in place for a long time, now they have all come together and are more pronounced than before, according to John Campbell, who served as U.S. ambassador in Nigeria between 2004 and 2007, under the previous president Olusegun Obasanjo.

“When I was ambassador in Nigeria, the government was quite stronger, we could travel anywhere in the country,” said Campbell, who is also a senior fellow for Africa policy studies at the Council on Foreign Relations in New York.

Moreover, the ignorance of the north brought mistrust among the population.

“I give very little credence to any of these kinds of conspiracy theories,” said Campbell. “Boko Haram is an independent organization.”

The group, whose name means “Western education is a sin,” has been tormenting Nigeria since 2009. Originally created with the purpose of imposing Islamist sharia law, it is becoming increasingly out of line and deadly, arbitrarily killing and kidnapping plain citizens for ransom, and thus despised by both Christians and Muslims.

Boko Haram killed more than 1,500 people in the first three months of 2014, according to Amnesty International. The militants murdered another 200 civilians in a series of attacks during the last two weeks, including 45 people in a village near the northeastern Nigerian city of Maiduguri.

Solving the problem with Boko Haram will require more than just saving the girls.

“If I were at the place of the president, I would seek to reach out to the north; I would provide humanitarian assistance to internally displaced people; I would try to do what I could to end the sense of marginalization in the north. It takes time and it’s not so easy to do.”

Reconciling with the Military

A long-term strategy for solving the crisis in Nigeria should encompass reuniting the north, creating economic benefits for the population, reconciling Christians and Muslims, and designing a military strategy. Other factors include where to train the army so that it becomes more effective in fighting Boko Haram and protecting the population, according to Brookings Institution’s Felbab-Brown.

President Jonathan announced on May 29 an all-out war on the Boko Haram group, and authorized the army to take all legal measures to fight them and bring back the girls.

But this gave the army little impetus to act.

“The military are too frustrated [with the president], they feel the president is blaming them for weak political leadership without giving them any support, and they see the president is not interested in what is happening in the north,” said Felbab-Brown.

Nigeria has a long history of military coups, which started shortly after the independence from Britain in 1960. Moreover, little has been spent on army operations from the N1 trillion ($ 6.1 billion) federal defense budget, and well- trained senior officers were forced to retire clearing the way to favored juniors, The Africa Report wrote in its June issue.

The federal government’s neglect of the north, which led to the girls being kidnapped in Chibok seems to have overflowed the water in the cup of people’s patience.

“Many Nigerians are questioning why this has been allowed to continue without the government taking more concrete and forceful means to eradicate the group before now,” wrote Patricia Taft, senior associate at the Washington-based Fund for Peace, in an email from Abuja.

Taft says this case has dramatically exacerbated tensions in Nigeria, which have already been simmering in the run-up to the presidential elections scheduled for February 2015. And this might prove dangerous.

“These tensions are currently being played out mainly in the political arena but without a concerted effort by both the government and opposition leaders to back away from inflammatory rhetoric; the potential for an outbreak of full-scale violence remains high.”

Niran Adedokun agrees with this stance. He wrote in an article for Nigerian newspaper Punch on May 30, “Discerning people will agree that Nigeria is closer to war today than we had ever been since the end of the civil war.”

Adedokun appeals to “every well-meaning Nigerian without respect for ethnicity, religion, or political persuasion to come together and save the country from the anarchy that this insurgency is threatening to bring upon us.”

But some retain the hope that however trying the moment may be, Nigerians know who the real enemy is and will unite against it.

“I don’t agree that Nigeria is close to war more than ever,” Samuel Okocha, radio news anchor and freelance journalist, based in Lagos, Nigeria, wrote via email.

Those who have died from Boko Haram attacks come from different ethno-religious backgrounds. The war is against terror. Not Nigerians against Nigerians. Citizens are only angry with the government for not doing enough to protect them. That’s the situation for now.”

It remains to be seen how events will develop. And while few believe that the girls will be returned intact, the news reveals they have been dispersed and kept across the Nigerian border in Cameroon, Chad, and Niger. The hope is that this will be a turning point for the reunification of the country.