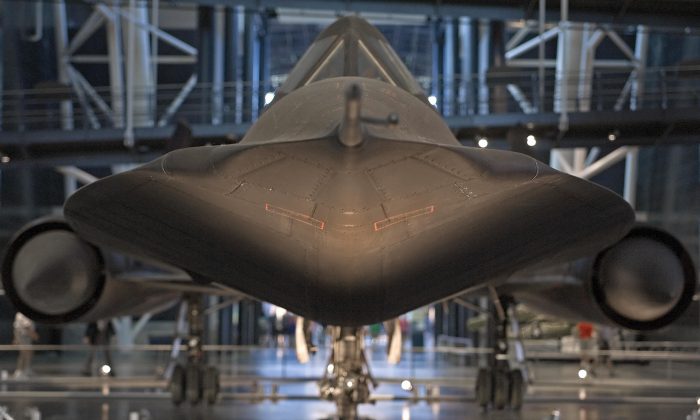 The Lockheed SR-71A Blackbird is displayed at the Smithsonian Institute's Udvar-Hazy Air and Space Museum in Chantilly, Virginia. on Aug. 23, 2006. (Paul J. Richards/AFP/Getty Images)
US News

Boeing has revealed a potential successor to the legendary Blackbird SR-71 spy plane and the company says it could travel at over five times the speed of sound.

The plane, which some have nicknamed ‘Son of Blackbird’, would travel at such velocity that enemies would have no time to react.

The concept was unveiled at the American Institute of Aeronautics and Astronautics SciTech forum in Orlando, Florida.

The design is similar to the SR-72 that Lockheed Martin is working on, meaning the race is on to be the first to market.

“It’s a really hard problem to develop an aircraft that takes off and accelerates through Mach 1 all the way to Mach 5 and beyond,” Kevin Bowcutt, Boeing chief scientist for hypersonics, told Aviation Week.

Boeing needs the plane to be able to take off, accelerate, slow down, and land by itself—just like the original SR-71 from 1964.

The company plans to use a conventional turbojet to bring the plane up to Mach 3, then switch to a different system to boost it beyond Mach 5.

“The specific impulse of an air breathing engine goes down with increasing velocity, so you have to make the engine bigger to get to Mach 5,” said Bowcutt.

“But doing that means a bigger inlet and a bigger nozzle, and trying to get that through Mach 1 is harder,” he said.

Meanwhile, Lockheed has been working on the SR-72 since the early 2000s. It will also be a hypersonic strike and reconnaissance plane but it will fly faster than Mach 6. It is expected to be in the skies late in the 2020s.

“Although I can’t go into specifics, let us just say the Skunk Works team in Palmdale, California, is doubling down on our commitment to speed,” Orlando Carvalho, executive vice president of aeronautics at Lockheed Martin, told the SAE International Aerotech Congress and Exhibition, reported the Daily Mail.

“Simply put, I believe the United States is on the verge of a hypersonics revolution.”

The original SR-71 was so fast it could outrun surface-to-air missiles. It set a speed record of 2,193.2 mph—a record it still holds today.

It traveled at around 85,000 feet, or about 16 miles above the earth, close to the edge of space, requiring pilots to wear special protective pressurized suits.

Boeing hasn’t announced when they expect to have a sky-ready model of their ‘Son of Blackbird’ yet.