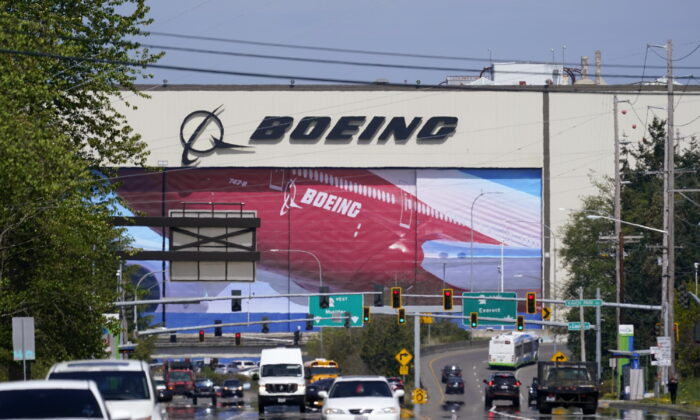 Boeing said Wednesday that it lost $1.2 billion in the first quarter as it took large write-downs and lost money in both its civilian airplane and defense businesses.

The loss was bigger than Wall Street had forecast, and the company’s quarterly revenue also fell short of expectations. Boeing burned through $3.2 billion in cash.

“Messier quarter than any of us would have liked,” CEO David Calhoun acknowledged on CNBC.

Shares of Chicago-based Boeing Co. fell as much as 12.6 percent after the opening bell Wednesday—to a 52-week low—and were down 7 percent in midday trading.

Boeing offered some optimism for improvement, however, saying that it has submitted plans to resume deliveries of its 787 airliner and it increased production and deliveries of the 737 Max passenger jet during the quarter.

Calhoun said the company was on track to generate positive cash flow over the entire year “despite the pressures on our defense and commercial development programs.”

“This was another dreadful quarter from Boeing,” Robert Stallard, a longtime aerospace analyst who covers Boeing for Vertical Research Partners, said in a note to clients. “And what we think will really worry investors is that we keep getting MORE bad news.”

The company again pushed back the expected first delivery of a new version of its huge, twin-aisle 777 passenger jet until 2025, five years after the original target. The delay was widely expected, as Boeing adapts to certification standards that have been tightened since regulators approved the Max, then were forced to ground the planes after two deadly crashes.

The delay in expected approval for the 777-9 caused Boeing to forecast $1.5 billion in “abnormal” production costs for the plane, which is designed to carry more than 400 passengers on long-haul flights. Boeing will halt production at least through the end of next year to avoid building planes that might need to be reworked later.

Boeing took a $660 million charge for its program to build two new presidential Air Force One jets—specially modified Boeing 747s—which it blamed on higher supplier costs and schedule delays. It also took $367 million in charges on a military training jet. Inflation is lowering the value of Boeing’s fixed-cost contracts for government customers.

Boeing said it submitted plans to the Federal Aviation Administration to resume deliveries of the 787 passenger jet. Those deliveries have been halted for more than a year by production issues that Boeing previously said would add about $2 billion in costs, of which $312 million was recorded in the first quarter.

Airlines are expecting a boom summer, with travelers returning in huge numbers after two years of pandemic. But some of them, like American, have trimmed summer schedules because they haven’t received the Boeing 787s that they ordered years ago.

“They have a busy summer schedule. We have already disappointed them with respect to the capacity on that summer schedule,” Calhoun said. Just when Boeing will be cleared to resume deliveries of 787s is up to the FAA, but Calhoun said “We will be back in the air sooner rather than later.”

Boeing expects to boost production of the 737 Max to 31 planes a month in the current quarter, which runs through June. That plane was grounded worldwide for nearly two years after two deadly crashes.

And Boeing took $212 million in pretax charges related to Russia’s invasion of Ukraine. Sanctions imposed by the United States and allies have barred Boeing from selling planes or performing services for Russian airlines.

In a memo to employees, Calhoun said Boeing is taking steps to improve long-term performance.

“We are a long-cycle business, and the success of our efforts will be measured over years and decades, not quarters,” he said.

Boeing’s commercial-airplanes division lost $859 billion, hobbled by the inability to deliver 787 jets while Boeing tries to fix production flaws on the twin-aisle plane.

The defense business, long a bulwark against volatility in aircraft sales to airlines, lost $929 million as revenue fell 24 percent.