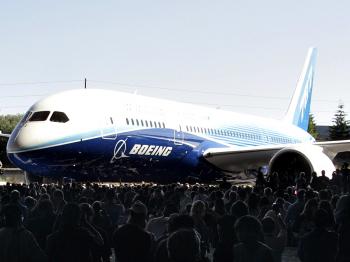 Today, Boeing has 840 orders (net of cancellations) from airlines around the world, with Japanese All Nippon Airways as its launch customer. (Tangi Quemener/AFP/Getty Images)
Business & Economy

Antonio Perez
View profile
Follow
biggersmaller
Print
Beset by two years worth of setbacks, errors, and general misfortune, Boeing Co. employees will breathe a collective sigh of relief as the Boeing 787 Dreamliner is finally ready for its test flight this week.

Boeing announced that the final flight date would be determined by internal reviews, the weather, and permission from the Federal Aviation Administration. The next-generation Dreamliner a mid-sized commercial jet boasts a quieter ride, lower emissions, and will use less fuel due to lighter materials.

Last Thursday, Chicago-based Boeing conducted final review and analysis of the static test from last month, and completed the final gauntlet-testing on the test aircraft, signaling that the plane is ready for take off.

"I am happy to report that the program has validated the airplane structure for the 787 Dreamliner," said Scott Fancher, vice president and general manager of the 787 program.

The static test, which tests the structural soundness of the wings, was necessitated by an earlier discovery of several weak points where the Dreamliner’s wings connected to the fuselage.

Boeing revolutionized its aircraft assembly with the 787—albeit laden with errors and delays.

For the first time in company history, Boeing abandoned its approach of receiving individual parts and assembling the aircraft at its Everett, Wash. plant. Instead, the company hired subcontractors to do more work and then ship the sub-components to Boeing.

This required a great deal of expertise on the subcontractors’ part, as well as close monitoring and quality assurance by Boeing managers and engineers. The change in production led to delays, as some subcontractors were unable to complete their work on time.

Soon thereafter, the company announced additional delays, and production was further hampered by the Boeing machinists strike in late 2008. In November 2008 Boeing reported an additional delay due to incorrect installations of certain fasteners by its suppliers.

In June 2009 at the Paris Air Show, Boeing said that a test flight for the Dreamliner would begin in two weeks. However, several days later the company issued a press statement regarding the needed to reinforce the sides of the aircraft,” and the maiden flight would be delayed indefinitely until the issue is resolved.

By November, it appeared that the fuselage issue was fixed by Boeing, and the Dreamliner’s test flight would finally commence in December.