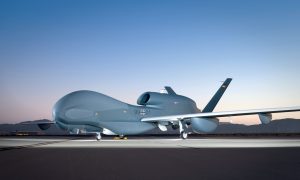 Laser systems have been used for decades to shoot down ballistic missiles, mortars, and other swift, airborne objects. The past past few years, they’ve found a new target: drones.

The pesky devices have already been used in attempts to fly drugs over the southern border and into prisons, and there are growing concerns that drones could be used by terrorists to wreck havoc, making defense laser systems more needed than ever.

Lockheed Martin built an anti-drone laser system in 2012, MBDA Deutschland did the same earlier this year. Boeing is now the latest defense company to jump on the bandwagon, rolling out the Compact Laser Weapon System this week.

The primary advantage that lasers have against other anti-drone technology—nets carried by another drone, radio jammers, and even shotguns are all candidates in this burgeoning field—is its range. Systems that are large enough could theoretically have a range in the hundreds of miles. During the Cold War, the Reagan administration considered building a system of laser-equipped satellites in low orbit as a shield against potential nuclear strikes from the Soviet Union.

Laser systems, which aim at their targets automatically, are also easier to operate. A net-carrying drone would require a skilled drone pilot, and a shotgun someone with accurate aim.

Unlike missiles, drones aren’t dangerous enough to require being taken down miles away. Boeing built its laser system, which take up the space of four large suitcases, for extreme portability, not range, but the company told Wired that anything visible to binoculars would be within reach, although it declined to give specifics. For comparison, Lockheed’s ADAM laser system has a range of 1.2 miles.

Boeing’s laser can operate on power from an electric outlet, and can even run on batteries, although for only for “a few shots,” Boeing told Wired.

But laser systems tend to be pricey, and Boeing declined to reveal just how much its laser system would cost. The Department of Defense’s $10 billion anti-missile laser program was denounced as a boondoggle in a recent report, and installing a single laser system on a naval transport unit could cost up to $40 million.

The price means anti-drone lasers won’t be used for typical law enforcement. Given that most small police departments struggle to even afford a helicopter for manhunts, it’s doubtful how many would be buying a laser.