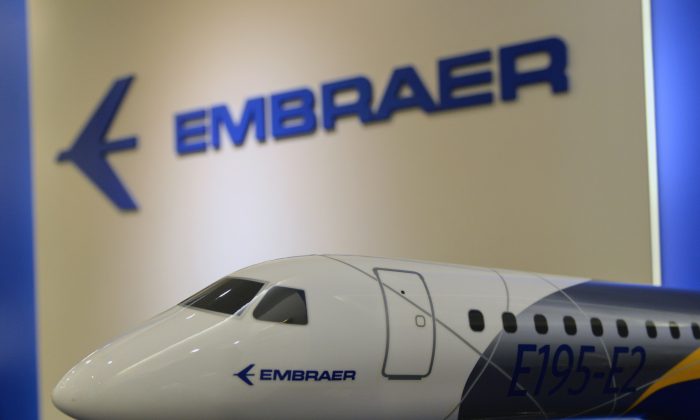 A display model of an Embraer E195 medium-range airliner is seen on display at the Embraer Asia Pacific office in Singapore June 29, 2017. (Roslan Rahman/AFP/Getty Images)
Companies

Potential tie-up with Embraer a necessary step
By Fan Yu

Boeing is considering a potential partnership with Brazil-based Embraer as aerospace industry giants consolidate in an effort to broaden scope and combat upstarts from Russia and China.

No formal offer has been proposed by Boeing, and the final deal could look different than a traditional joint venture or equity stake after upcoming negotiations, according to a Dec. 23 report by Reuters. The Wall Street Journal first reported the possibility of a tie-up.

Embraer is a leading manufacturer of single-aisle regional jets, a segment of the aerospace industry in which Boeing currently has no foothold. Embraer also has a small defense arm.

Launched in 1969 by the government of Brazil and divested in the mid-1990s, Embraer is one of the most successful Brazilian businesses on the global stage. The company is often seen as a source of national pride for Brazil and is one of the most respected Brazilian enterprises outside of the mining sector. The Brazil government still controls the company via a so-called “golden share” and must approve any tie-up with Boeing.

Brazilian President Michel Temer told reporters at a news conference on Dec. 22 that he would welcome a capital injection or partnership, but would reject a full buyout or sale of a controlling stake to the Chicago-based Boeing.

A Boeing tie-up with a smaller airframe manufacturer isn’t a surprise to aerospace analysts, given that the industry has been ripe for consolidation.

Growth of narrow-body regional jets (70 to 130 seats per plane) is expected to outpace the overall industry. Embraer projects global demand for 6,400 new jets in the 70-to-130-seat segment over the next 20 years, according to the company’s 2017 market outlook.

Regional aircraft is a hole in Boeing’s portfolio. Boeing and its chief rival, France-based Airbus SE, effectively have a duopoly in the large commercial aircraft business. For years, Boeing and Airbus have been introducing new flagship large commercial airliners. Boeing has the 787 Dreamliner wide-body aircraft, and Airbus makes the world’s largest commercial jet, the double-decker A380 that carries a 250-foot wingspan.

Boeing has some history with the Montreal-based Bombardier. Last year, Delta Airlines agreed to purchase 75 units of the 100-seat Bombardier C Series jets, leading Boeing to lodge a complaint with the Trump administration that Bombardier enjoys Canadian subsidies and sold the jets below cost.

The U.S. Department of Commerce sided with Boeing and on Dec. 20 finalized a 300 percent tariff on passenger jets produced by Bombardier, making the jets potentially unaffordable for Delta. Bombardier argues that the Commerce Department’s decision “ignores long-standing business practices in the aerospace industry, including launch pricing,” in a company statement on Dec. 20.

Airbus’s new stake in Bombardier gives the Canadian company more capital to compete in the regional jets sector, and potentially gives Airbus a leg up over Boeing globally.

And that’s why Boeing needs Embraer, whose E jets compete directly with Bombardier.

The timing is also impeccable for Boeing. The company has been the biggest gainer within the Dow Jones Industrial Average during 2016; its stock almost doubled this year, gaining 90 percent between Jan. 1 and Dec. 22. The high stock price grants the company more currency to spend in any tie-up with Embraer.

If the potential partnership includes shared manufacturing, Embraer immediately diversifies Boeing’s supply chain. Brazil would be a lower-cost manufacturing base for Boeing, which currently makes all of its planes in the United States.

There are “potential benefits to the deal, particularly a lower manufacturing cost basis for Boeing and greater supply chain leverage and an enhanced sales network for Embraer,” Credit Suisse analysts wrote in a research note to clients on Dec. 22.

Another benefit for Boeing is in limiting future cooperation between China and Embraer. China is a major investor in Brazilian industry, and a partnership with Boeing could shield Embraer from Chinese influence.

China has ambitions to become a major global aerospace supplier. The Commercial Aircraft Corp. of China (Comac) produces the ARJ21 regional jet, which entered service last year as the first Chinese-made jet to fly commercially after a 14-year development period marred by delays, technical problems, and allegations of corporate espionage. Comac’s upcoming narrow-body C919 is under prototype testing, and once launched, will compete against the Boeing 737 and Airbus A320. Comac has already submitted applications to Chinese and European regulators to certify the airplane for global service.

Expected offerings presented by Comac and Russia’s Sukhoi—another airframe manufacturer with global ambitions—will be less expensive than planes sold by Boeing and Airbus.

The potential Boeing–Embraer tie-up and the Airbus–Bombardier relationship not only increase the competitiveness of Boeing and Airbus in its existing duopoly, but give the giants additional cost synergies and broader R&D capabilities in a long-term fight against upstarts from China and Russia.