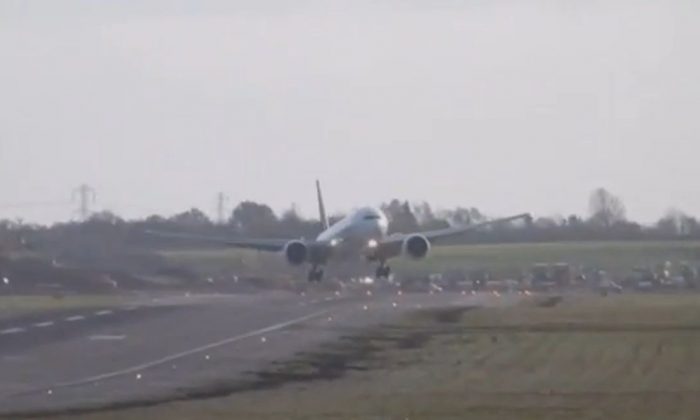 A Boeing 777 landing in Birmingham almost took a turn for the worse on Thursday. Video footage shows the Boeing 777 attempting a landing at the Birmingham airport, but the plane nearly got blown over by winds during a powerful storm that blasted the U.K.

The Mirror reported that the Emirates Airlines plane was coming from Dubai.

According to the video footage, the plane was coming down at an odd angle before the pilot was apparently able to make an emergency maneuver.

Passengers said they could watch the video of the Boeing’s landing attempt on screens inside. One woman reportedly threw up during the landing.

Passenger Kevon Miller wrote on Twitter: “So after THREE failed attempts at landing in windy Birmingham, had to land at Gatwick. Nice one. FFS!!! #HeadsGone”.

He added: “Never flying again … could have died. I was full on shook ain’t gonna lie wind was nuts bruv!!! One woman opposite me started throwing up after the 2nd attempt in landing.”

After the two attempted landings, the plane’s pilot flew to London’s Gatwick Airport, and it landed there safely, the Daily Mail reported. The Gatwick Airport is located more than 100 miles away.

A Brussells Airlines plane landing in Birmingham also was blown from side to side on Thursday while making a landing attempt.

The Birmingham Airport told Metro paper that two other planes were diverted because of the wind.

Here’s the video of the Brussels Airlines landing attempt at the same airport: