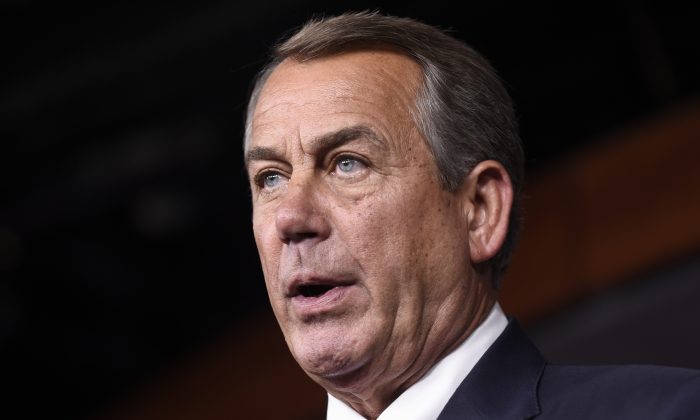 WASHINGTON—House Speaker John Boehner warned Sunday against “false prophets” in his own party making unrealistic promises, saying his resignation had averted a government shutdown this week but not the GOP’s broader battle over how to wield power.

Speaking on CBS’s “Face the Nation,” Boehner unloaded against conservatives long outraged that even with control of both houses of Congress, Republicans have not succeeded on key agenda items, such as repealing President Barack Obama’s health care law and striking taxpayer funding from Planned Parenthood.

He refused to back down from calling one of the tea party-styled leaders and presidential candidate, Sen. Ted Cruz, a “jackass.”

“Absolutely they’re unrealistic,” Boehner said. “The Bible says, ‘Beware of false prophets.’ And there are people out there spreading noise about how much can get done.”

Boehner’s resignation announcement on Friday, Sept. 25, stunned Washington but was long in the making after years of turmoil with the same House conservatives who propelled the GOP into the House majority on a tea party-style, cut-it-or-shut-it platform. Without Boehner, the job of leading divided congressional Republicans falls more heavily on Senate Majority Leader Mitch McConnell—who declared nearly a year ago that the GOP’s prospects of reclaiming the White House depends substantially on showing the party can govern.

The development rippled through the slate of 2016 presidential candidates competing for support among the GOP’s core Republicans. As Boehner announced his resignation to House Republicans Friday morning, Republican presidential hopeful Sen. Marco Rubio related the news to a conference of conservatives—who erupted in triumphant hoots. Rubio, retired neurosurgeon Ben Carson, and former Hewlett Packard CEO Carly Fiorina were among the GOP candidates who said Boehner’s departure showed it was time for the party to move on.

Fiorina suggested that McConnell’s leadership, too, has been unsatisfactory.

“I hope now that we will move on and have leadership in both the House and the Senate that will produce results,” Fiorina said on NBC’s “Meet the Press.”

“I think people are going to miss him in the long run, because he’s a person that is focused on solving problems,” Bush said on “Fox News Sunday.”

Boehner’s resignation announcement came as congressional Republicans faced a familiar standoff in their own ranks over whether to insist on their demands in exchange for passage of a federal budget—the same dynamic that led to the partial government shutdown of 2013. For nearly a year, McConnell, now the Senate’s Republican majority leader, has insisted there would be no repeat, even as conservatives dug in.

Retorted Boehner on CBS: “We have got groups here in town, members of the House and Senate here in town, who whip people into a frenzy believing they can accomplish things that they know—they know—are never going to happen.”

With government funding set to run out at midnight Wednesday, and conservatives insisting that Planned Parenthood be defunded in exchange for legislation keeping the government open, the GOP-controlled Congress seemed on-track for another costly standoff.

Until, that is, Boehner met Pope Francis.

The Roman-Catholic Ohio congressman described spending the day with his spiritual leader as deeply moving and a factor in the timing of his resignation announcement. Boehner said he had originally planned on revealing his plan to leave Congress in November. Away from the cameras, Francis floored Boehner by asking the speaker to pray for him—”I did,” Boehner said. “Well, you can imagine, I was a mess.” The pope blessed Boehner’s newest grandchild and spoke to Congress about resisting forces that divide people. And by the end of the day, Boehner said, “it was pretty obvious to me that, hey, I think it’s time to do this.”

“I think it helped clear the picture,” an emotional Boehner said of the experience.

He said he did not know what lies ahead for him, except a continuation of his yoga practice because, “It’s great for my back.”

But even as he looked forward, Boehner had terse words for the faction that he ultimately could not control. He harked back to 2013 and what he called the conservatives’ “fool’s errand” of insisting on the repeal of the health care law in exchange for passing a budget.

“Our founders didn’t want some parliamentary system where, if you won the majority, you got to do whatever you wanted. They wanted this long, slow process” he said. “And so change comes slowly, and obviously too slowly, for some.”