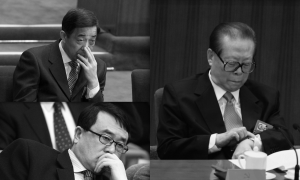 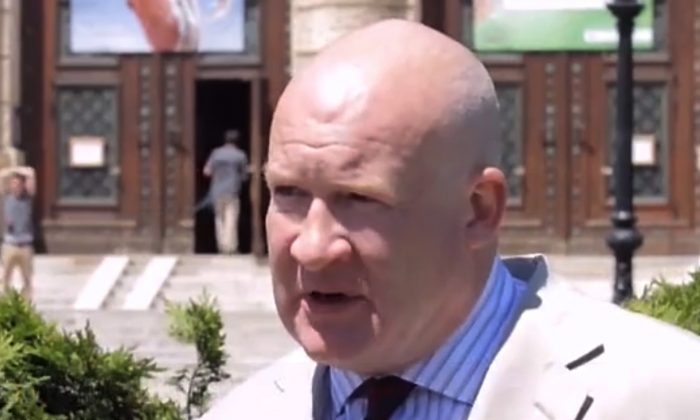 Ethan Gutmann stands in front of the Natural History Museum in Vienna, Austria, where the traveling Body Worlds exhibition is on display. Body Worlds includes human bodies that have been injected full of plastic for display. Gutmann is asking for DNA samples to determine if any of the bodies are from prisoners of conscience, including practitioners of Falun Gong. (NTD/Sonja Ozimek)
China

The dead human bodies preserved by being injected full of plastic by German anatomist Gunther von Hagens have toured the world for decades, and made their manufacturer a very wealthy man.

For years, too, the Body World exhibitions have also been a rich source of controversy, dogged by claims that the bodies of executed Chinese prisoners—including prisoners of conscience—have been splayed open and put on display for a paying public.

Now, von Hagens is being challenged to put to rest some of those allegations by supplying DNA samples of the specimens currently on display at the Natural History (Naturhistorisches) Museum in Vienna, Austria.

Ethan Gutmann is an investigative journalist who has written extensively about forced organ harvesting in China, whereby prisoners of conscience—mostly practitioners of Falun Gong, a persecuted spiritual discipline—are systematically killed for their organs. Standing in front of the Naturhistorisches Museum on July 12 he said that DNA samples would effectively resolve the controversy.

“We now have a show which is traveling around which may have the DNA of murdered prisoners of conscience,” Gutmann said in an interview with NTD Television, putting emphasis on the word “may.”

“The legs on some of the female specimens appear to be unnaturally short,” Gutmann said, based on observations he made when he visited the exhibition in Vienna recently. “The frames are a little frail; the skulls are a little fine. I’m not an expert, but these look Chinese.”

Gutmann’s suspicion is not only based on the anatomical features he observed. In 1999 von Hagens set up shop in Dalian, a city in northeast China where he acquired an unknown number of bodies.

At that time, Bo Xilai, the now-disgraced Chinese official, was mayor of Dalian. Bo is now under detention and awaits trial for violation of Communist Party discipline and a range of other offenses. He was known to have been a protégé to the former leader of the Chinese Communist Party, Jiang Zemin, and an early proponent of Jiang’s campaign to persecute Falun Gong.

According to a 2004 investigative report in the German newspaper Der Spiegel, by the year 2001: “Around von Hagens’s corpse factory in Dalian, there were already three labor camps and prisons. Among them were the ‘No. 3 Provincial Prison’ and the ‘[Dalian City] Reeducation Through Labor Camp.’ In the notorious ‘[Dalian] Yaojia Detention Center,’ political prisoners are detained, among them adherents of the spiritual movement Falun Gong.”

Later, von Hagens won an injunction that forbid Der Spiegel from making the claim that he used the corpses of executed prisoners.

In an interview with the New York Times two years later, though, von Hagens said: “When I came here, [Sui Hongjin] said we’ll have no problem with Chinese bodies. … He said we can use unclaimed bodies. Now it’s difficult, but then it was no problem at all.”

Sui Hongjin was von Hagens’s former apprentice who split from von Hagens’s operation in 2002 and began operating his own plastination factory, supplying, among others, the plastinated body touring company called Bodies: The Exhibition. While von Hagens denies using executed Chinese prisoners any longer, Bodies: The Exhibition carries a disclaimer saying that some of its bodies came from the Chinese police.

Gutmann said his approach to calling on DNA samples from von Hagens is two-pronged: first, it will establish whether Chinese bodies were used in his exhibits, which allows for the next step, collecting the DNA of family members of Falun Gong practitioners who were killed in China, so as to test for any relationship. Secondly, it will put pressure on the exhibition that Sui is associated with, to also provide DNA about the bodies that it has.

The rivalry between von Hagens and Sui should propel him to cooperate, Gutmann said.

“There is another Body show going around the world. It’s actually bigger. It’s run by Von Hagens’s former manager Sui Hongjin,” Gutmann said in his statement, which was read out to the press and public. “His bodies come from the PSB [Public Security Bureau]. His sponsor, Premier Exhibitions admits it. Sui has plastinated an estimated thousand bodies. We have a saying in English: every criminal makes one mistake. Could shipping murder victims loaded with DNA around the free world qualify as a mistake? It sounds crazy that someone would take that chance. But let’s find out.”

Gutmann continued: “If any samples are Chinese we can match them with DNA from Chinese families who lost a loved one because they were Falun Gong. That will take years. But it’s worth it, because the families have the moral authority in this case.”