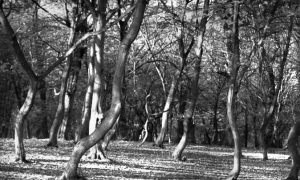 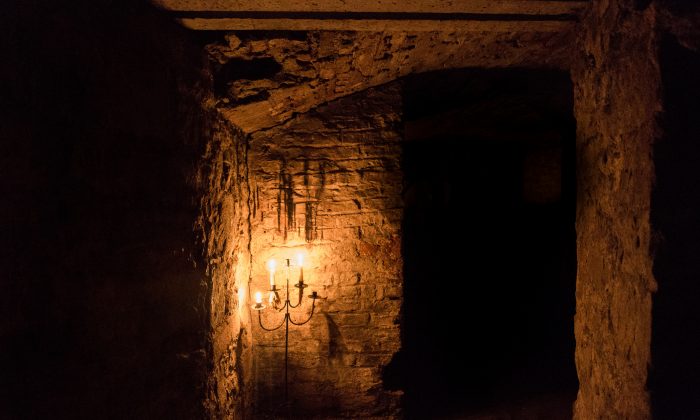 Beneath the ancient fortified city of Edinburgh, Scotland lie the South Bridge Vaults—notorious underground tunnels and chambers that became the dwelling places of the impoverished and the villainous.

At first, the dark stone vaults served as houses and workspaces for tradesmen and merchants. But as conditions deteriorated, the poorest of Edinburgh’s citizens lived, and very often died, there. Prostitution, poverty, violence, and illness consumed the vaults, and infamous serial killers hid their dirty work in the stone recesses.

The city of Edinburgh straddles seven major hills. Castle Rock has been a site of human habitation since the 2nd century A.D. The iconic Edinburgh Castle and formidable fortifications were built on the site around the 12th century A.D. to protect against invaders and sieges.

The closer one lived to this castle, the safer one was, so bridges were built to span the deep ravines that sloped away from castle itself—highways of their day.

The 19 arches to support the southern bridge were built in 1785, and vaults, chambers, and tunnels were established beneath the bridge’s surface, walled in, and sectioned off in descending levels. In all, approximately 120 vaults were built beneath South Bridge. It opened officially in March 1788.

The South Bridge surface was a booming location for businesses, especially during the Industrial Revolution. Beneath the thriving merchant areas were workshops, and beneath those were living quarters.

The Lower You Were Under the Bridge…

It was under all this that an underground city grew, eventually descending into slums filled with poverty, illness, and violence. The lower you were under the bridge, the lower your social class was.

The industrial age in Scotland brought work and wealth, but housing, planning, and public health did not improve at the same pace. Living conditions in cities were very bad. There was overcrowding as families of more than 10 people lived in cramped rooms, mortality rates were high (higher than in England and other European countries at the time); and with no sanitation, no running water, and no sunlight, illness spread. Tuberculosis was a growing problem.


For those who lived deep in the Edinburgh Vaults, the troubles were compounded. The Irish Potato Famine of 1845-1847 flooded Scotland with refugees, who often ended up at the very bottom of South Bridge. In addition, criminals and underworld dwellers moved illicit materials through the tunnels in a black market, established a red-light district with gambling and countless pubs and brothels, and crime, robbery and murder flourished.

A Haven for Serial Killers

The conditions were so bad at one point that serial killers were reportedly able to murder over a dozen hapless victims and store bodies in the vaults without detection.

One infamous instance of this is known as the Burke and Hare murders. In 1828, two Irish immigrants, William Burke and William Hare, allegedly killed 16 people (mostly women), stashed the dead bodies in the tunnels and chambers, and then sold them to a surgeon for dissection during his popular anatomy lectures.

The demand for cadavers during a time of advancing medical science meant bodies were a valuable commodity.

The demand for cadavers during a time of advancing medical science meant bodies were a valuable commodity, and the fact that corpses were not detected so close to the people living in the vaults speaks volumes about the conditions there.

There are indications even the poorest citizens were leaving the South Bridge slums between 1835 and 1875. The vault complex was purposefully shut down, and tons of rubble were dumped in at some point, although the date isn’t found in any remaining records.

The dark history of the South Bridge Vaults was forgotten in time.

Real-Life ‘Lord of the Flies’: The Strange, Violent History of Pitcairn Island

Over a hundred years later, in 1980, a Scottish rugby player inadvertently rediscovered the hidden tunnels and chambers, and they were excavated and restored with hundreds of tons of rubble removed. It was only when excavators unearthed children’s toys, medicine bottles, plates, and other household items in midden heaps that researchers realized the South Bridge had been home to many unfortunates.

With the unnerving atmosphere, and the eerie accounts of the vault history, it’s no wonder paranormal events have been reported. Certainly, the chilling reports of Burke and Hare’s murdered victims in the vaults are creepy enough, but there are several other specters who are said to now haunt the chambers as well.

A ghostly child named Jack is said to grab visitors’ hands, and the more menacing “Mr. Boots,” described as “a nasty piece of work,” purportedly throws rocks at people. Some who visit the vaults say they can hear his heeled boots stomping across the cobblestone and his voice echoing through the tunnels.

Despite (or more likely due to) this, tours into the Edinburgh Vaults are very popular, and businesses have been set up to host private events, weddings, and live music. Several high-profile television shows and documentaries have been done on the ghostly voices and supernatural happenings.

Today there are many who risk traveling down beneath the ancient city to experience what life might have been like for those who dwelt in the South Bridge Vaults.