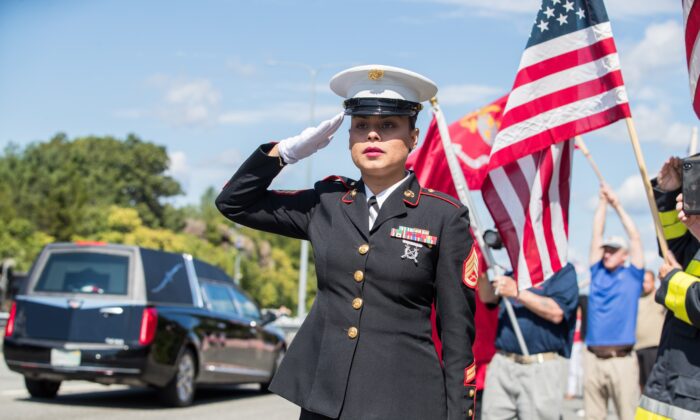 U.S. Marine Ssgt. Alice Ward stands at attention on the side of I-93 North as the hearse carrying fallen Marine Sgt. Johanny Rosario Pichardo passes in Stoneham, Mass., on Sept. 11, 2021. (Scott Eisen/Getty Images)
US News

Body of US Marine Killed in Kabul Attack Returns Home

The body of a U.S. Marine killed in a suicide bombing in Afghanistan returned home to Massachusetts on Saturday, the 20th anniversary of the attacks that led to America’s longest war.

Twenty-five year old Pichardo died in the Aug. 26 suicide bombing near the Kabul airport where people were being evacuated amid the Taliban takeover of Afghanistan.

A dozen other U.S. service members and 169 Afghans were killed as people struggled to get into the airport and on flights out of the country.

A funeral Mass will be held for Pichardo on Monday.