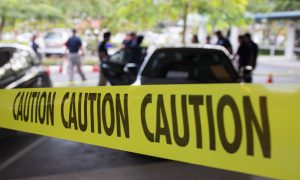 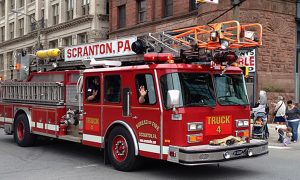 Searchers Locate Body of Missing Man on His Birthday
0 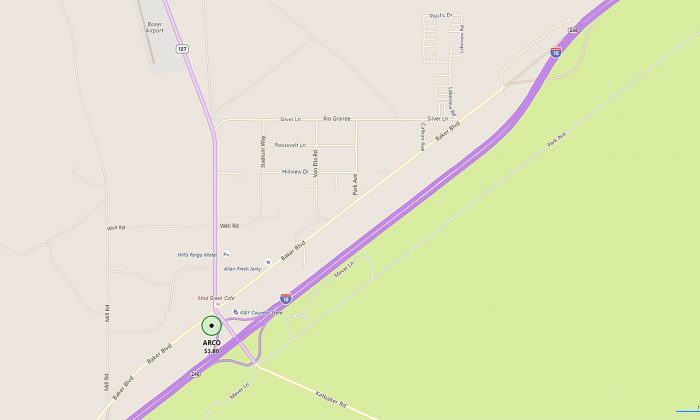 (Lower L)Baker, California—the Arco station where Ryan Singleton was dropped off; central is Silver Lane, where a pair of joggers found his body. (Screenshot—Bing Maps)
Crime and Incidents

The body of 24-year-old Ryan Singleton lay in the California desert for two-and-a-half months before a pair of passing joggers found him. The dried, decayed corpse was missing its eyes and internal organs.

Singleton had disappeared from a Baker, California, gas station in the middle of July 2013. No one knew where he went—and to this day, no one knows how this model and aspiring actor ended up dead in the desert.

Singleton had good looks and ambition. He had enough talent and enough people skills to make it into the world of professional modeling and dreamed of getting into movies.

At age 21 he headed for New York City, the heart of the U.S. fashion industry. He found some success, eventually getting onto the runway during Fashion Week.

Singleton met some friends there and decided to head to L.A. to form a production company—making movies seemed a better way to break into the industry than attending casting calls.

He returned to New York in December 2012 and got married to fashion designer and celebrity stylist Kithe Brewster. That only lasted a few months before the couple separated.

Singleton returned to Atlanta to regroup. In July, he decided to drive out to L.A. for a weekend vacation.

According to his mother, Iris Flowers, Singleton rented a car and drove to Los Angeles and then to New Mexico, Arizona, and finally Las Vegas, Nevada.

On July 9, 2013, Singleton called his mother asking her to send him some money. He was in Las Vegas and apparently broke. Later that day, Flowers got a call from Brewster. He told Flowers that Singleton was on the West Coast and that his life might be in danger.

According to a report by 11Alive, Singleton called several friends for money—but apparently didn’t get enough. On the drive home, he ran out of gas right on the edge of Death Valley, one of the most inhospitable areas in the country.

Singleton left his car and started walking toward Baker, California, down Interstate 15. A California Highway Patrol officer spotted him and picked him up.

The pair searched for Singleton’s car, but never found it. Apparently, Singleton had walked farther than he thought because the car was later found about 3 miles away from where he met the officer.

The officer took Singleton to an Arco service station in Baker—somewhere he could shelter from the scorching heat of the Mojave Desert. Later the officer said that as far as he could tell, Singleton was not impaired or intoxicated.

Singleton called a friend in L.A. and begged a ride. When his friend arrived a few hours later, Singleton was not there.

Apparently, Singleton left the store and walked into the desert, into the searing 100-plus degree summer heat.

That was the last anyone saw of the model and aspiring actor until Sept. 21, when a pair of hikers found his remains about 200 yards off Silver Lane, less than 2 miles from the Arco station.

Singleton’s body was partially decomposed—but it was clear that his eyes and most of his organs were missing.

No Cause of Death

Because Singleton’s remains were so desiccated—his body weighed only 50 pounds when it was recovered—the San Bernardino County Coroner’s Office was not able to determine a cause of death. The missing organs are likely the work of animals, according to the coroner’s report.

Singleton’s mother is not so sure. “I don’t know of an animal that comes to a body and just picks out certain parts of the body,” said Flowers. “I don’t think it was animal activity at all.”

“I believe that he was taken from [Baker] and later put back there,” Brewster said according to the New York Daily News. “I just don’t think he passed out there and was there for two and a half months.”

A team of experts from NBC including criminal defense investigator Charles Mittelstadt and Joseph Scott Morgan who has a master’s degree in forensic sciences from Jacksonville State University Center for Applied Forensics analyzed the autopsy report. Morgan thinks that animals were most likely responsible for the missing organs. If the organs had been removed surgically, Morgan said, the forensic pathologist who conducted the autopsy would have seen evidence of the use of surgical tools.

Still, Singleton’s mother is haunted by a conversation she had with her son before he left for Los Angeles.

Flowers said her son asked her, “Something bad is going to happen to me isn’t it?” When she asked him what he meant or if he owed anyone a lot of money he replied, “I’ve done a lot of things to hurt a lot of people,” she recalled for NBC News.

“I don’t know if he felt some kind of way because he left the (production) team, married Kithe, and it didn’t work out with Kythe and now he’s home. He knew he hurt me by disappearing and not communicating with me. Anybody outside of that, I couldn’t figure out who it could be,” she told NBC affiliate 11Alive.

Though the disappearance of Ryan Singleton is still an open case with the San Bernadino Sherriff’s Office, it is a cold case. With no leads and not much evidence that can be gathered from the withered body, law enforcement has no way to move forward.

Iris Flowers and her family have started a GoFundMe page to try to defray burial costs and possibly exhume the body for an autopsy, or continue the investigation.

While it is possible that Singleton passed out due to heat or dehydration, and fell, striking his head, Flowers is convinced that someone struck him and stole his organs.

Flowers hopes an autopsy and further investigation might turn up some clues—and provide some closure.