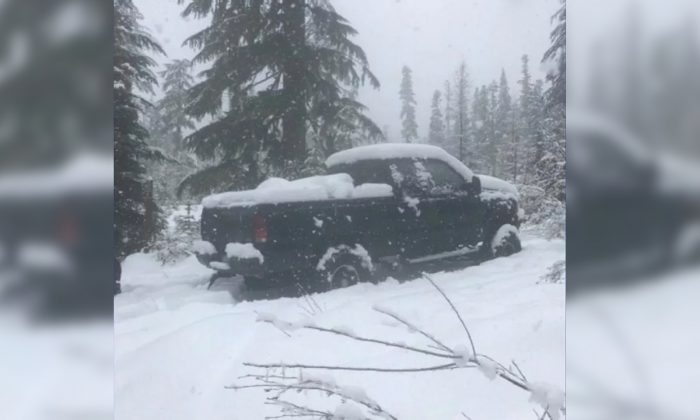 The body of a Vancouver man who disappeared while hunting elk in Washington State has turned up near where searchers had previously found his pickup truck.

Search crews discovered the body of elk hunter Joel Presler on Nov. 24. He had been out of contact since Nov. 11.

Presler, 37, had traveled from Vancouver to hunt elk in the Forlorn Lakes region of Washington’s Gifford Pinchot National Forest.

Skamania County Sheriff’s deputies found his 2004 black Ford pickup on Nov. 15 off Forest Road 6035, OregonLive reported. Searchers scoured the area around the Peterson Prairie Campground and Comcomly Lake area, where his truck was found, but they found no sign of the missing hunter.

Four-foot-deep snow made the search more difficult. Snow had been falling heavily since the start of Presler’s hunt and during the early days of the initial search.

On Nov. 19, The Associated Press reported that the search had been suspended.

Authorities said that Presler, an experienced sportsman who had hunted in that area for several seasons, was too experienced to have traveled far from his truck to camp, AP reported.

Presler was reportedly in good health with no known physical issues.

Deputies said that warmer temperatures melted most of the snow making it much more likely that a search would yield results, Fox reported.

Searchers located Presler’s body 100 to 150 yards from his parked pick-up. He was wearing shirt, pants, and boots, but had taken off his parka, hat, and gloves, according to The Oregonian.

These items, along with his backpack, were found about 50 yards from his body. Sheriff Dave Brown said that this was “indicative of hypothermic behavior.” People experiencing severe hypothermia will often shed clothing out of the mistaken belief that they are overheating.

Given the heavy snowfall, Presler could have lost sight of his truck and wandered looking for it until he succumbed to the cold.

Brown told OregonLive on Nov. 25 that his department would continue to investigate the death, and that hypothermia likely was a factor in Presler’s demise.

The Clark County Medical Examiner’s Office will conduct an autopsy.