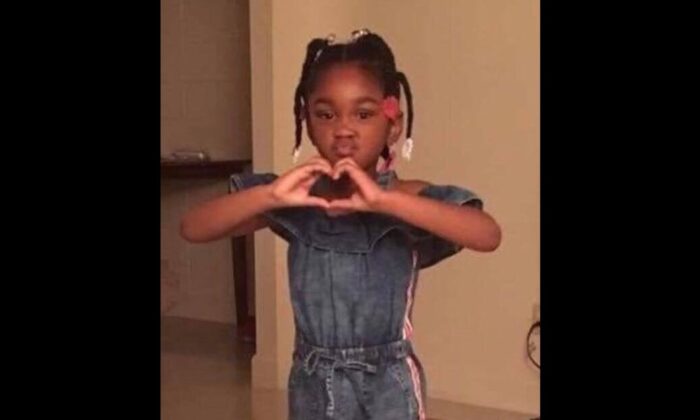 The body of a 5-year-old girl who had been missing since August has been found in South Carolina, police in Sumter announced Tuesday, Oct. 22.

Human remains were found on Friday at Richland Landfill on Screaming Eagle Road. Police had been searching the site on and off for the past two months, trying to find the body of the little girl, Nevaeh Lashy Adams.

The human remains were tested and confirmed to be that of Nevaeh, Sumter Police Chief Russell Roark announced at a Tuesday news conference, reported The State.

Roark was among several who praised people across the state for their efforts in trying to find Navaeh’s body. Nearly 400 people from 40 separate state and local agencies were involved in searches for Nevaeh, the newspaper reported.

Enforcement Division Maj. Stewart Robinson, who was in charge of coordinating the multi-agency search, called the mission “daunting.”

“It was a daunting task that could not have been accomplished by one agency,” Robinson said, reported WLTX.

Over 25 days at the landfill, searchers had to look through 2,000 tons of material, and forensic experts had to analyze what was found at the scene, the CBS affiliate reported.

“It had an unimaginable impact in our community, on the family who were not ready to bury their children,” Roark said at the news conference Tuesday, according to WLTX. “It’s an impact that we will live with for the rest of our lives.”

The 5-year-old went missing after her mother’s body was found in an apartment at Lantana Apartments in Sumter on Aug. 5. Police said that Nevaeh’s mother, 29-year-old Sharee Bradley, had been stabbed to death.

A family member had found Bradley’s body wrapped in a rug on Aug. 5. The coroner determined that Bradley died after she suffered stab wounds to her head and neck, according to The State.

Witnesses had seen a man—Daunte Maurice Johnson, 28—fleeing the apartment on the day Bradley’s body was found, police said. Police found him shortly after about a block from the apartment complex and arrested him on the same day.

After being taken into custody, Johnson told police that he killed both Bradley and her daughter with a knife, police said in early August.

In particular, Johnson told authorities that he disposed of the little girl’s body in a dumpster near the apartment from where he had fled.

Police charged Johnson with murder in both deaths.

At a news conference on Aug. 26, Roark announced that there was enough forensic evidence, including blood from the crime scene, to charge Johnson with killing Nevaeh, even though her body had yet to be found, reported WLTX.

The motive for the two murders has yet to be determined, Roark said, according to The State.

Johnson also has a criminal record in other states and is a suspect in a Missouri homicide, police had previously said.

He remains jailed at the Sumter County Detention Center.