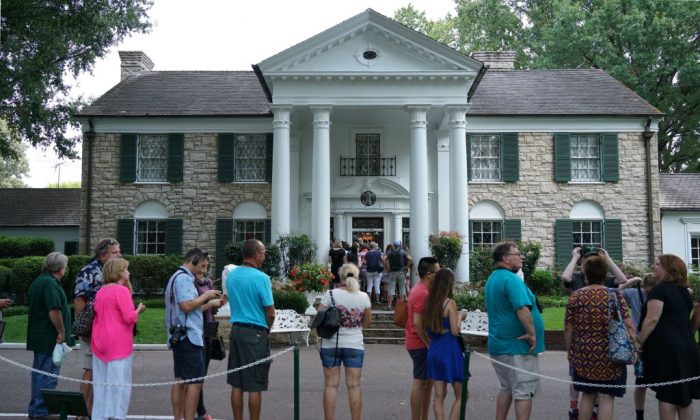 Visitors in line to enter the Graceland mansion of Elvis Presley on Aug. 12, 2017 in Memphis, Tennessee. (Mandel Ngan/AFP/Getty Images)
US News

An elderly couple’s final trip to Elvis Presley’s home has created a mystery to rival the conspiracy theories surrounding the death of the king himself.

Philip Snider, 72, left his home in Ohio on Jan. 4, heading to Memphis, Tennessee to visit Graceland with his wife Roberta, a big Elvis fan.

They never quite made it, according to Snider, who says his wife, 69, passed away in the car just as they arrived in Memphis.

The problem is that authorities cannot find her body,

Police are still struggling to pick apart what they describe as a “bizarre” mystery and find her body as they investigate a 728-mile corridor across three states.

Snider has offered three completely different accounts of what happened to his wife’s body, according to media reports.

Police in two states have been investigating the disappearance since it was first flagged by Roberta’s brother on Tuesday, Jan. 9.

Brian Heisler said that his sister’s husband had called on Sunday, Jan. 7, and explained she had died on the trip.

But then alarm bells began to ring, he told CantonRep.

“This all started when [Philip] told me he left her ashes down there,” Heisler said. “She’d always said when she was cremated, she didn’t want her ashes sitting on a mantel.”

Heisler called Hartville police in Ohio on Jan. 9, worried about his missing sister.

“We talked to her husband who said she passed of natural causes,” Hartville Police Chief Larry Dordea said on Jan. 11 when the case first emerged, reported The Akron Beacon. “At first blush, what happened seemed reasonable.”

However, when they checked with Tennessee authorities, there was no record of Roberta’s body, nor any Jane Doe who matched her description.

“He said they were driving to Memphis … stopped in a hotel along the way,” Dordea said. “He noticed she was [dead in her seat] … as he was driving down the road, he saw an EMS-type vehicle, so he stopped and told them.”

“I think [Philip’s] recollection may be suspect,” Dordea said.

He told the Beacon at the time that it wasn’t clear whether Snider intentionally misled police or not.

The couple had traveled from their home in Stark County down through Kentucky, stopping off for a night in a motel, before heading down to the Days Inn hotel in Memphis.

Media investigations show records indicating that Snider checked into the hotel in Memphis at 11 a.m. on Jan. 5, and checked out early the next morning. He used his wife’s credit card, but reports by Local Memphis and WMC say that there are no reports of his wife being seen with him.

A week later, and police in Tennessee had begun investigating. However, they offered yet another account of what happened.

“Trying to clear this mystery up yet, because it is pretty bizarre,” Benton County Sheriff Kenny Christopher told WBBJ.

“He says he put her body in plastic and disposed of her body over this bridge,” Christopher said.

“What he’s telling authorities is she passed away somewhere in Kentucky on the way to Graceland, and he continued on with their journey,” Christopher said.

According to Christopher, Snider told police on his way home to Ohio he dumped his wife’s body off of Interstate 40 into the Tennessee River.

“We flew up and down the river channel for about eight miles north of here where the river’s flowing, and we found nothing,” Christopher said.

The brother-in-law Brian Heisler told the Beacon that he thinks Snider may be suffering from dementia.

“We think he just made a mistake as to where it happened.”

“We think it may have occurred in Kentucky. We’re pretty certain it wasn’t malicious. We don’t think it was foul play.”