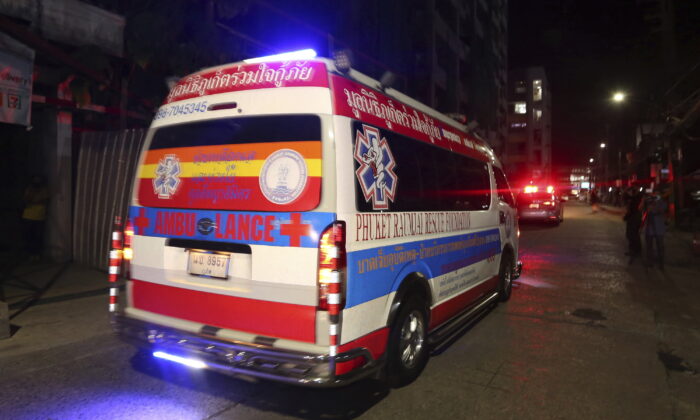 An ambulance carrying the body of Shane Warne moves from Surat Thani Hospital in the southern of Thailand to Suvarnabhumi International Airport before sending him back to Australia, on March 7, 2022. (Thanapat Cherajin/AP Photo)
Sports

Body of Cricket Great Shane Warne Arrives Back in Australia

MELBOURNE, Australia—The body of cricket great Shane Warne is back in Australia.

Just before dawn outside Bangkok his coffin—draped in an Australian flag—was put into an ambulance at the Thai Police Forensic Institute and driven to an international airport. A private jet flew Warne’s body back to his hometown of Melbourne, landing at Essendon airport about 10 hours later.

Local media said family members were at the airport when his body arrived about 8:30 p.m.

Warne was widely regarded as one of the top players of all time. He died last Friday while on vacation with friends on Samui Island in southern Thailand. An autopsy report said the 52-year-old Warne died of a suspected heart attack.

The Victoria state government is planning to host a state memorial service for Warne on March 30 at the Melbourne Cricket Ground, home to many of Warne’s greatest sports moments, after the family holds a private funeral.

The MCG was the stage of Warne’s famous Ashes hat trick in 1994 and his 700th test wicket on Boxing Day in 2006 during his final series before retiring from international cricket. He was born and raised in Melbourne.

Warne’s family issued a statement late Monday describing the night of his death on March 4 as the beginning of “a never-ending nightmare.”